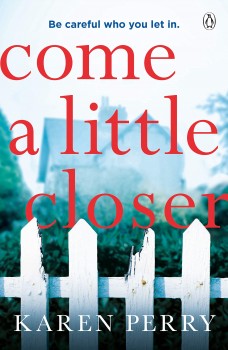 Is Anton a callous murderer or was he wrongly convicted? And is his friendship with his young neighbour Leah genuine or something altogether more sinister?

Anton causes a stir in the neighbourhood when he returns to his neglected and rambling Dublin home after 19 year away. It turns out that he has spent those years in prison, as punishment for the brutal murder of his flighty wife – a crime he may or may not have committed. Enter a naïve young couple, Leah and Jake, who are only too keen to rent his dilapidated but cheap basement flat.

Leah is an insecure woman with her own dreadful secret buried deep in the past. Throw in the couple who live across the road – Hilary who still yearns for Anton, her secret lover before tragedy took him away from her, and hang-dog husband Greg - and then you have a heady brew …

When a friendship develops between 60-year-old Anton and 20-something Leah there are far- reaching implications for all of them.

The story is told through the eyes of Anton, Leah and Hilary.  This makes for a real page-turner as one narrator finishes (often on a cliffhanger) and another takes over. There are plenty of incidents and the plot moves along at a steady pace with occasional flashbacks to the events of a summer 20 years before – events which led up to the death of Anton's wife, Charlotte, at the end of a sex and booze-fuelled neighbourhood party.

The sense of place is well conveyed in the descriptions of the dusty, abandoned house with its dark, dank and gloomy basement and the secretive, overgrown and shared garden. All the action takes place from June to October during one long hot summer. However, I was often surprised to be reminded that this is a story set in Dublin. Although the author lives there I didn't get a strong sense of the city either from the action or the dialogue. The old house is the claustrophobic centre of the story but really the street and neighbourhood could have been anywhere.

The action builds to a satisfying climax as lives intertwine, new bonds are formed, and old ones shattered. And in the end the question marks over the 20-year-old mystery are more than adequately answered. This is a thriller where the author draws convincing characters, revealing their innermost thoughts in a way which both intrigues and involves the reader.