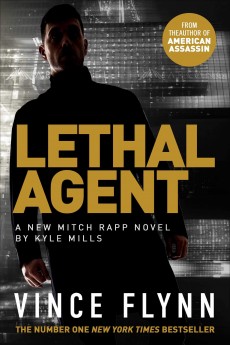 Anti-terrorist contractor and former CIA agent Mitch Rapp must face a bioterrorist threat to an America weakened by internal divisions.

This is the fifth of Kyle Mills’ offerings after taking up the challenge of continuing the career of CIA counter-terrorist agent Mitch Rapp after the untimely death of his creator Vince Flynn.

Flynn’s 13 political/action thrillers were all New York Times bestsellers. Mills has continued that record and this up-to-the-minute, all-action plot, which rarely gives the reader time to draw breath, looks certain to continue it.

It’s easy to be cynical and suggest the publishers did not want to lose a lucrative cash cow, but the newer stories which owe a great deal to Mills’ own background – his father was an Interpol director and the author has drawn on his contacts in the intelligence community to give the plot biting realism – speak for themselves.

The story is a mixture of current news reporting, prescience, covert ops and massive – always justified – violence by an all-American superman, so aptly summed up by Toby Keith in the country hit Courtesy of the Red, White and Blue: ‘We’ll put a boot in your ass. It’s the American way’ – and could be a template for almost every Hollywood or television B action movie. But underneath, there is real concern about the current state of America, its increasingly toxic political divisions and particularly its future in dealing with the present and growing threat of extremism.

Mullah Sayid Halabi, the successor to Osama bin Laden as head of ISIS, somehow survived the grenade attack by Rapp on a cave in Northern Iraq where he was meeting high-ranking members of the organisation. He has used his convalescence from his injuries to refine both his religious and tactical thinking. When presented with a chance to virtually destroy the Great Satan and effectively rewrite the world order, he is convinced it is the will of his God.
A team from a charity closely resembling Medicins Sans Frontiers have discovered a deadly new virus in the remains of a ruined village in the wilds of war-torn Yemen – a particularly appropriate and timely threat.

Halabi learns of the virus from a former Saudi intelligence agent seeking to impress the ISIS hierarchy. He kidnaps a brilliant, but morally weak, French microbiologist. To disguise his intended assault on the West, Halabi forces him to produce anthrax, a process recorded on slickly produced videos threatening an imminent attack on America itself. US public tension is already high in the hysteria of the primary stages of a divisive presidential election which could change the face of the nation.

While politicians focus entirely on establishing or maintaining their own power and privilege, Halabi contracts with a Mexican drug cartel to smuggle a sample of anthrax into the country.
Unknown to anyone but his closest advisers, Halibi has also kidnapped people infected with the deadly virus and the anthrax is merely a test of the cartel’s capability to smuggle humans across the border.

Rapp and CIA director Irene Kennedy get wind of the plans and set out to counter them. But their ability to act is weakened by the fact that the scheming, fiercely ambitious, populist woman likely to become the next president despises them. But when the US Drugs Enforcement Agency accidently stumbles upon a test shipment of anthrax smuggled into California, the current president has no choice but to give Mitch carte blanche to go after both the smugglers and ISIS. Mitch must infiltrate the drug cartel in a black ops mission, constantly compromised by political manoeuvring, to find Halibi and counter the threat.

The plot is bang up to date with American politics playing a large part. An outgoing two-term decent guy President unable to help his party withstand an all-out assault from the self-serving opposition front runner candidate, so far ahead in the polls she can’t be stopped bears uncanny similarities to the recent past and current political climate. With the future of the CIA and its operations under the microscope, both Kennedy and Rapp know their own positions are at stake and are forced to make choices both to protect themselves as well as their country

It’s an interesting and not impossible story with a sharpness to the writing and style that keeps the reader wanting to know more and is a fine continuation of the series. Don’t look for any character development, though. After 19 books, Rapp, Kennedy and trusted comrades Scott Coleman and his highly-trained team, are long past personal backstories – it is the danger, blood and grit before them which propels them towards yet another success.