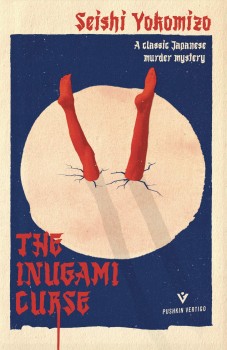 Detective Kosuke Kindaichi is invited to assist when the head of the Inugami clan dies, leaving a complex will which enrages his three daughters.

This is the second Pushkin Vertigo issue of a Seishi Yokomizo book in translation, originally published in Japan in 1972 but set in the immediate post-war period. Dishevelled detective Kosuke Kindaichi reappears, called in by a lawyer for the wealthy Inugami family whose head Sahei has just died.

The lawyer is killed before Kindaichi gets a chance to hear why he has been summoned. But the detective is still on the spot when further murders occur affecting the Inugamis. It is understood that these are related to the will of Sahei, which is complex and Machiavellian. Sahei had three daughters, each of which had a son, but the bulk of the estate is to go to only one – that chosen by Tamayo, the granddaughter of a man who once gave Sahei his start in business.

The above is a greatly simplified version of the familial relationships involved, and even with a full page of characters at the beginning for the assistance of readers the plot is challenging. It goes without saying that several of the cast eventually turn out to be other than they appear, which only adds to the complexity.

Anyway, several of the family end up dead in a variety of grisly ways, linked to the Inugami symbols of power: the chrysanthemum, the zither and the axe. The events occur in early winter in the extensive lakeside home of the family, with both Kindaichi and the police in more or less continual attendance, unable to halt the flow of blood.

The horror of the murders is emphasised in a most melodramatic fashion by the author. The hatred of the three sisters for each other is evident at all times, they are always grinding their teeth while looking daggers at each other, while the observers (the detectives) have chills running down their spine, are unable to speak without stuttering, and sweat and shake with the tension.

It is perhaps strange that this continual commentary should have the effect of diminishing the impact on the reader, but such is the case. Coming on top of what is a rather contrived plot and a vast range of characters it is easy to lose both the thread and interest. There is fun to be had spotting clues but overall I regret to say this is insufficient to encourage perseverance to the end.

Despite the obvious Japanese aspects of the story, Yokomizo’s enthusiasm for Western crime stories of an earlier period is evident and makes for a sometimes strange mixture. At one point in a rush to apprehend his quarry Kindaichi dons an Inverness cape over his kimono, which struck me as a good metaphor for his style. At any event, he summons the cast for a final revelation of the facts in a thoroughly traditional manner.