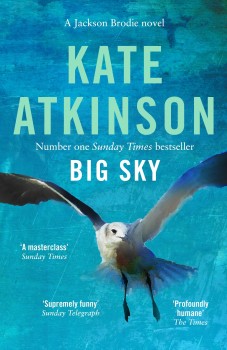 PI Jackson Brodie stumbles upon some dark and dangerous deeds in the picturesque seaside town he now calls home.

The crime-loving woman's crumpet is back! Tearing up and down the coast of North Yorkshire Jackson Brodie – JB – once again becomes embroiled in a complex set of circumstances seemingly beyond his understanding or control. It almost seems as though he is watching from the wings as the drama unfolds but hey presto, by the magic of some very clever storytelling, all the threads come together and our hero can take centre stage and bring the action to a most satisfying conclusion.

This is a story with the distressing themes of child abuse, exploitation and modern slavery at its heart. But Kate Atkinson writes with a light touch and with such grace and humour that she manages to convey some very grim facts without dwelling on all the gory details.

There is a rich cast of colourful but believable characters. Jackson's own family are portrayed, warts and all. His lolloping teenage son, Nathan, divides his time between his father and mother, Julia, and she’s never short of a scathing put-down on the subject of her ex – “I can't decide which you are, Jackson, a hypocrite or just a failed ideologue.”  And there’s his distant daughter, Marlee, soon to be married to man with a name (Jago) which Jackson despises.

There are well-drawn principals like Crystal; wife, mother and glamour puss. Taken from the care system to be used and abused by the rich and powerful, Crystal has used her native wit and intelligence to escape and make a good marriage to one of North Yorkshire's most successful businessmen. We first meet husband Tommy on the golf course with his mates Andy and Vince.  Their dealings form one of the spines of this story. The other spine begins with two young Polish sisters planning their imminent trip to England to start an exciting new life. And before too long these two storylines become horribly entwined.

With a large cast of interesting supporting actors, some from previous episodes of Jackson's life and who feature in earlier books, it occasionally feels as though the author is giving out too much information for a new reader to cope with. But I find Kate Atkinson's writing so entertaining that I am happy to suspend disbelief over the number of coincidences we are presented with. Or as Jackson would say: “A coincidence is just an explanation waiting to happen …” The minor characters flit across the stage, disappear for a few chapters, only to reappear and always add something pertinent to the action.

Jackson Brodie in his loose role of private investigator often seems as in the dark about the bigger picture as does the reader. But when the (many) villains of the piece are finally revealed it is Jackson, not the law, who decides who will be punished and who will be spared. And we applaud him for it!

JB is a person who sometimes finds it easiest to advise his clients and friends alike in the manner of country music classics –  of the 'you gotta know when to hold 'em; know when to fold 'em …' ilk.  And so, as he walks away, he is still a slightly down-at-heel PI with a lukewarm relationship with his two children and no love interest in sight. Ripe for another outing, I would hope!