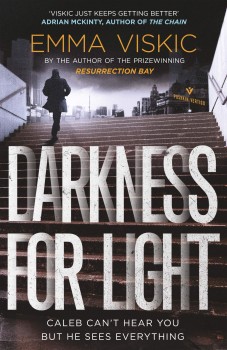 Deaf Melbourne-based PI Caleb Zelic goes to meet a new client but finds him dead, and is drawn into a dispute he only vaguely understands but with participants prepared to kill wherever necessary.

This is the third outing for Melbourne PI Caleb Zelic, profoundly deaf since the age of five, but determined to overcome the problems this imposes. His sense of alienation and confusion that was so strong in previous books has been somewhat ameliorated by counselling, although he has to be constantly on his guard against succumbing to his demons.

Arriving at a rendezvous with a new client he finds him shot dead – and the man turns out to be from the federal police. Shortly after he is cornered by another AFP officer, Imogen. She threatens him with exposure for previous crimes and demands he find his ex-partner, Frankie, who went to ground after betraying Caleb.

His search takes him to the home of Frankie’s sister Maggie, who he finds laid out in a pool of blood. Through a chain of circumstances, he ends up with Maggie’s nine-year-old daughter Tilda. And when the girl is kidnapped his concerns multiply. The impetus for the string of violence is a set of financial records compiled by Maggie, recording details of money-laundering by some of the biggest criminals in Melbourne.

As the records are encoded, the several potential interested parties are not identified, but attempts to use Caleb to secure the information, or to eliminate him from the search for them, come thick and fast. Imogen and Frankie have been hostile in the past and are not to be trusted. Even his friends, the policeman Tedesco and Sammi the computer expert, are not wholeheartedly on Caleb’s side.

The dense plot and ambiguity of the intentions of many of the cast make this an extended struggle by the protagonist to stay alive long enough to rescue Tilda and end the power of the records, preferably by exposing the facts to public notice. There are several surprises and close shaves before Caleb brings matters to a conclusion.

As mentioned earlier, the latest version of Caleb is rather more in control of himself and his ability to make progress feels therefore somewhat more plausible. There remains his reliance on hearing aids and lip-reading to complicate his life, but there are times when the skills developed to overcome his disability work to his advantage.

We also get increased focus on his intuition which makes him such a good detective, quick to grasp the implication of minor clues he uncovers. Despite the pressures of his main case, he also spends most of the book trying to save his friend Alberto whose cafe refuge for the deaf is being threatened, and again picks up on very slight indications to figure out the source of the problem and the solution.

The book is full of action, morally compromised characters and uncertainty which creates great tension. The series is getting better and better.