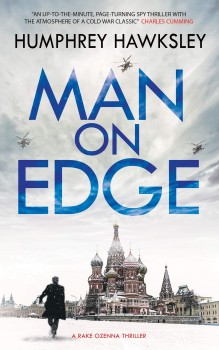 A rogue Russian colonel plans the assassination of the US and Russian presidents at a summit meeting. Rake Ozenna stands in his way.

This book follows Man on Ice, in which elements within the Russian military invaded Alaska across the Bering Strait under cover of a medical rescue mission. The attempt was foiled largely through the presence of Rake Ozenna, born in the Diomedes Islands and skilled in Arctic warfare.

Man on Edge posits a new president in the White House, keen for rapprochement with Russia and agreeable for a summit with his Russian counterpart, planned to take place on a boat on the border between Russia and Norway within the Arctic Circle. But Yumatov, a colonel within the Russian military, intends that the meeting will end in death, paving the way for a realignment of Russia towards the East.

Yumatov also plans to have Ozenna pay for the Russian deaths in Diomedes. An attempt on his life is made in Washington, and when this fails Yumatov launches a complex operation in which Ozenna’s ex, Carrie Walker, is lured to Moscow to meet her uncle, an admiral, who has information on the latest submarine stealth technology. Walker is attacked and on the run, with Ozenna the person with the best chance of getting her out.

Events come to a dramatic resolution in a blizzard at temperatures well below freezing. Yumatov commands powerful military resources and is entirely merciless, but in the ice and snow Ozenna and his half-brother Mikki have the edge.

Hawksley’s second thriller is as exciting as the first, with very brief breaks in the action throughout. There are several unexpected killings in a very brutal manner which bring to mind some of the more bloody episodes in some of Iain M Banks’ stories, or Game of Thrones. Carrie Walker demonstrates her skills as a trauma specialist and does pretty well dodging the Russian secret service pursuers in a lengthy chase.

The book also conveys well the sense of complex conflicts of interest within both governments, with a range of agencies all contesting for primacy, so the reader is never sure whether hostility from key personnel is honest disagreement about tactics, an attempt to gain currency with a superior, or subversion. The leaders on both sides are revealed as being enthusiasts for their own half-baked ideas who have to be managed by people with proper understanding, a political idea that I found it surprisingly easy to accept.

The world in Hawksley’s fiction does seem closer to significant international conflict than one might hope is the reality; a parallel universe perhaps or some near-future where things have taken a distinct turn for the worse. Luckily, however, that world has characters like Walker and Ozenna who can be relied upon to save the day.