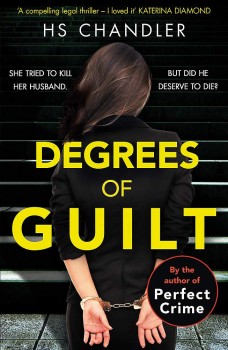 Maria Bloxham calls the police to report she has killed her husband, and soon finds herself on trial. The jury are invited to consider whether her husband’s behaviour constitutes a defence.

The book begins with Maria Bloxham, a woman approaching 50, contemplating the bludgeoned body of her husband Edward, and calling the emergency services. She freely admits responsibility and police find her behaviour strangely free of emotion, although she faints when told that her husband still shows signs of life.

In due course Maria is in court accused of attempted murder. Edward has barely survived and will never recover, and the prosecution present a picture of a selfish and short-tempered monster. When Maria takes the stand, however, she relates how Edward’s controlling behaviour had deprived her of every ounce of self-confidence and made it impossible for her to escape in any other way than through Edward’s death.

Of the jurors sitting in judgement, the one through whose eyes we see the action is Lottie, who feels her role in life has narrowed to care for her husband and their young son. She exults in the freedom and change of scene offered by her jury service, and when an attractive man on the jury makes advances she is easily persuaded to respond.

The author says in a post-script that the Me Too movement gave the book’s themes greater topical relevance, but the subject matter is developed well beyond a simple polemic. Maria’s sense of disassociation immediately after the initial event is brilliantly conveyed, and in court she persuasively articulates the steps by which Edward progressively undermined her sense of self-worth.

There is also an apparent tension between her hopelessness before the event and her ability to harness her anger afterwards, only partially explained by the end of Edward’s malign influence.

Lottie’s readiness to become sexually involved with a fellow juror comes across as somewhat shocking, despite the explanations offered, although it certainly livens up the normally sober jury discussions. When it turns out that the affair is going to lead to complications the reader is hardly surprised.

The court action fills much of the book, giving a good sense of the tenor of cross-examinations and the operation of the court generally, in particular the deliberations and argument in the jury room. This is full of little dramas, with jury members demonstrating plenty of bias according to their personal prejudices. Altogether, Degrees of Guilt is a well-written portrayal of a trial where the issues are of wider interest.