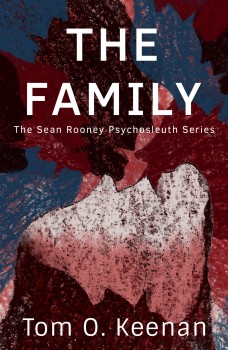 The arrival of an ISIS zealot in Glasgow threatens not only the Family, a collective of 12 crime families, but the police and the public at large.

The chief protagonist in this book is Sean Rooney, a psychologist who counsels the mentally ill but who himself hears voices, a condition related to the abuse he suffered as a child. As the book opens his ex-wife Jackie is badly hurt by a bomb. Rooney believes he bears some responsibility and manipulates the health system so that he is detained on a mental health order for a month.

This, his auditory hallucinations and his apparent belief that he is ‘The Father’ do not prevent him on his release being employed as consigliore by crime boss Davy McGing, one of the Twelve Apostles, the Glasgow crime fraternity known collectively as The Family. Competition from several groups of immigrants convinces members of the need to cooperate to survive, and when the McGings come under fire Rooney is elected as co-ordinator and spokesman.

The city is subject to severe challenge when Al-Jamal, who claims adherence to ISIS, appears in Glasgow. A policeman is kidnapped, and the authorities are informed they will receive one of his fingers every day unless a demand for a meeting with the Home Secretary is met. Jackie, an ACC, and her father Hubert the police Commissioner, come under severe pressure and seek the assistance of The Family to obtain results.

Also playing a crucial role in events is Jean, the local MI5 agent, and her husband Millar, a senior policeman seconded from the South. Supposedly MI5 and the Glasgow police are working together; in practice Jean and Jackie are enemies, and as ISIS attacks increase it is not clear who is able, and willing, to put a stop to it.

I did not find this an easy book to read; that such a hopelessly compromised bunch could hold down positions of authority in any form of organisation whatsoever is hard to credit. Rooney frequently gives utterance to the words that come to him, or his belief that he has some special mission from God, and I doubt that a hardened criminal organisation would give him house-room.

Abuse of drugs and alcohol, sexual perversion, foul language and a breath-taking lack of behavioural discipline is more or less universal in Rooney and the other lead characters. I am no authority on Glasgow and hear that it is a tough place, but frankly I would be surprised to hear that residents were not insulted by this portrayal. You would have to have a pretty poor opinion of public servants to take this picture as being even remotely credible.

It is also very nasty, encompassing several killings and tortures on a scale well beyond anything seen in Britain hitherto, which may be why it seems so long, bringing to mind Ambrose Bierce’s comment: ‘The covers of this book are too far apart.’