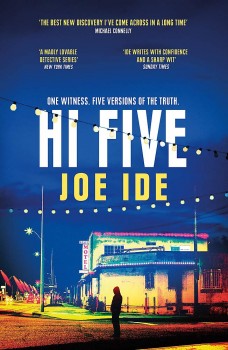 PI Isaiah Quintabe – IQ – is coerced into trying to prove that the daughter of the West Coast’s biggest illegal arms dealer did not kill her boyfriend. But the girl has multiple personality disorder – and any of her radically different ‘selves’ could have committed or contracted out the murder!

Joe Ide’s Sherlockian unlicensed PI Isaiah Quintabe – IQ to friends and enemies alike – seems to have rather lost his way in this latest of the so far compelling series featuring life in the ‘hood’, the economically depressed downtown South Central of Los Angeles, where the largely black population live with rampant street crime and gangland warfare.

But if IQ is off his game, so are most of the recurring characters in this strange mix of white nationalism, politics, inter-gang warfare and violence. Ide has developed a close to autistic, socially awkward, PI who has difficulties reading or understanding emotions and who has a traumatic past, obviously with a view to moving the character in a different direction.

Despite his curiosity, loyalty and desire to do the right thing and for a man supposed to be a genius, IQ does not possess much commonsense or ‘street smarts’. He is far from an action hero, although now beginning to acquire some martial arts skills. His friend and former partner, the con man and hustler Juanell Dodson, has always been there to see him through, but IQ resents the thought he might need help – and in any case, Dodson is now pre-occupied with the problems of parenthood, his own legacy and providing a decent, stable life for his family.

IQ is coerced by the West Coast’s biggest illegal arms dealer into finding evidence that will exonerate his daughter as the prime suspect in the murder of her boyfriend – and his lieutenant – found dead in her presence in her Newport Beach boutique. The investigator’s motivation is the threat to cripple his new girlfriend, a gifted violinist on the verge of a major career breakthrough. The problems are that IQ is still discovering his emotional side and struggles with his feelings for her and his yearning for the traumatised artist Grace, the woman who first woke the feeling and who has now returned to LA.

Then there’s the accused girl herself, a sufferer from multiple personality disorder. Almost any of her discordant characters appear capable of either committing or contracting out the killing for reasons of their own!

This is a quirky, high-octane thriller with a lot of backstory providing sometimes confusing detours. Guns, violence and dangerous situations abound, largely brought about by IQ’s attempts to play the racially-based gangs off against each other, but there are also personal problems and small stories of life which have no bearing on the plot and serve only to show that life goes on despite one person’s personal difficulties.

Ide’s idiosyncratic take on life in East Los Angeles is told from various points of view to make the characters’ actions more understandable – and there are moments when these changes come faster than the reader can follow. But they create merely momentary confusion and overall the plot is easy to follow. If the execution is a bit scrambled at times, the plotting around IQ and Christiana’s main storyline is tight and well done.

The series appears to be evolving from the more cerebral Sherlockian nature of the early stories to become a lot more action-packed. Ide, who grew up in South Central LA reading Sherlock Holmes, reflects the speech, style, musical tastes and attitudes of the neighbourhood and this irreverent and explosive mixture of social issues, urban horror, naivete and wit still fascinates, even if it is my least favourite in the series.