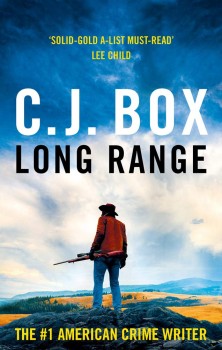 This is the 20th in a long line of novels featuring Joe Pickett, game warden for the rural Saddlestring District, who commonly finds that humans are his biggest problem. His friend Nate Romanowski, man of the woods, now has a partner, Liv and a baby, Kestrel, and shows signs of settling down.

The local crime agencies are assembled when a shot from a high-powered rifle apparently directed at Judge Hewitt takes down his wife. Hewitt has made plenty of enemies so there is a long list of potential culprits. Joe finds the county sheriff’s investigative methods dubious, and he establishes that the shot was taken from a great distance with a state-of-the-art sniper rifle capable of phenomenal accuracy.

The reader is also alerted to the presence in the locality of ‘El Puno’ (the fist), a specialist in murder from the Sinaloa cartel who recently lost one of their ‘wolfpacks’ when they came up against Joe and Nate. Nate has been singled out for revenge and his cabin is under observation. When he comes under suspicion for the shooting, his problems multiply.

As usual, there is plenty to enjoy in the Joe Pickett stories. The beauty of the country is always a feature, including unexpected encounters with wildlife. In a subplot, Joe is helping a warden from an adjoining district sort out the truth when a trophy hunter encounters a bear, and his guide is killed. The ‘hunter’ gets his version of events out on social media, but Joe’s sympathies (and ours) are with the guide and the bear.

An informed passage on the latest advances in personal long-distance killing weaponry is in US terms perhaps a natural corollary of the above. Freely available at a price are rifles and ammunition comprising sophisticated mixtures of complex materials, with sighting scopes which incorporate computers to adjust for all factors affecting aim. Wanted for ‘personal protection’, no doubt.

The crimes and the background information are well integrated into the continuing story of the life of the two protagonists. Joe’s three daughters have left home and Joe and his wife Marybeth find things agreeably quiet, although Joe’s ghastly mother-in-law does her usual best to throw a spanner in the works.

Nate is trying to adopt a more conventional lifestyle, but the hatred of US Government agencies and Mexican drug cartels is effective in persuading him that he must return to living ‘off the grid’. I look forward to seeing how he is going to square this with the demands of his new family.

The wide-open skies of the Wyoming location seem to breed opinionated loudmouths who inevitably complicate the work of the righteous, against whom Joe and Nate’s understated expertise and natural abilities show to advantage. This series continues to improve.