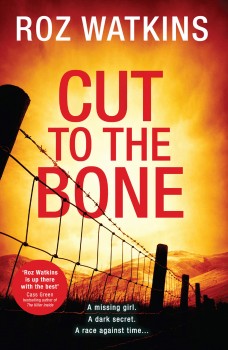 Cut to the Bone

Unlikely social media personality Violet Armstrong, famed for barbecuing in a bikini to extol the virtues of eating meat, has disappeared, and feelings are running high amongst a group of animal activists. DI Meg Dalton has the unenviable job of investigating the local abattoir where the missing woman worked.

I’ve followed Derbyshire cop DI Meg Dalton from her first outing, The Devil’s Dice, which saw Roz venturing underground, but I must admit that I quailed when I saw that the backdrop for Cut to the Bone was an abattoir. I think it’s fair to say that the book very nearly went into another reviewer’s pile, as I’m a lot more squeamish where animals are concerned than I am with people. But it’s a testament to my liking for DI Dalton that I took a deep breath, pulled on my Big Girl Knickers and ventured in …

Violet Armstrong works in the local abattoir just outside the chocolate box village of Gritton near Ladybower Reservoir. Her social media posts showing her advocating eating meat while barbecuing wearing nothing more than a bikini have gone viral on social media, bringing the debate over factory farming onto sharp focus. So when Violet disappears, the case is instantly high profile, with a group of committed animal activists turning things distinctly anti-social online by posting their hopes that she’s been fed to the pigs she would have helped to kill.

There’s something about the obsessive neatness of Gritton that makes Meg Dalton feel uneasy, as though the village is hiding secrets behind its neat gardens and the ornamental fencing that seems to define each road through the village. Her enquiries amongst the locals draw a blank and then things take a worrying turn when blood and human hair turn up in one of the pig-feeding troughs. The animal rights protestors seem jubilant but those who knew Violet best seem strangely unemotional.

It’s hard to form a connection with any of the villagers, from Kirsty who runs the local pig farm, to Anna Finchley, the owner of the abattoir and her brother Gary. The most sympathetic of the lot is abattoir worker loner Daniel Twigg, who lives in a caravan and makes strange sculptures out of piles of stone. Apart from him, I didn’t warm to any of them, and it quickly became clear that there are deep undercurrents of tension, dislike and maybe even hatred beneath the seemingly tranquil surface of the village.

Things aren’t too tranquil on Meg’s team, either. DS Craig Cooper is as mouthy and unpleasant as ever, and there is even tension between Meg and her constant shadow, DS Jai Sanghera. Things aren’t going too well between Jai and his girlfriend, and that seems to be spilling over into his relationship with Meg.

She’s got problems of her own as well, trying to come to terms with the recent death of her beloved grandmother, with the shadow of her sister’s death by suicide still a looming presence in her life. Then things turn personal, as Meg finds herself under the spotlight because she’s a vegetarian and is accused of sympathising with the animal activists.

And on top of all that, there’s the local legend of the Pale Child who’s said to haunt the village. If she sees your face, you’re sure to die … If that’s not enough to make you want to head back to the town, then you’ve got a stronger stomach for these things than me!

Despite the grisly background, I did enjoy Cut to the Bone, although I wobbled a bit when it looked like Hamlet the cat was in danger. Shades of Kathy Reichs and the frequently imperilled Birdie came to mind! Roz Watkins builds an impressive sense of place around Gritton, and the images of the drowned village under the reservoir were very vivid. Meg and the police team are an interesting bunch and I even found myself with some stirrings of sympathy for Craig Cooper. The story maintains a good pace, even when a dual timeline starts up, and there was plenty to keep me hooked in both past and present.

I’m glad I put my qualms aside, but I warn you, there are some very uncomfortable insights into what happens to put that pork chop on your plate, and I certainly didn’t fancy a bacon sandwich when I finished the book!