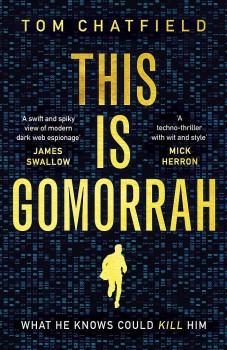 Azi Bello spends his life in a shed with his computers, so a real-life plea for help is unexpected and calls for skills in unfamiliar areas.

Azi Bello is very much a 21st century hero, a computer geek who spends most of his time in an East Croydon shed equipped with an Ikea desk, a coffee machine and heaps of arcane electronic devices. His abilities as a hacker are in marked contrast to those involving communication with humans, where he lacks experience.

In fact, his ‘friendships’ are entirely on-line, one or two virtual realities representing real persons about whose characteristics he can only guess, and who have equivalent capabilities for breaking into the websites of governments and major corporations. Azi has also devoted time to building a verifiable background for his creation ‘Jim’, the better to infiltrate and undermine Defiance, a white supremacist group.

Azi’s life undergoes a sudden convulsion when he receives a message from a familiar name, Sigma, looking for help. Sigma sends copies of files purloined from the Islamic Republic, containing details of their agents in Europe. She thinks the IR have discovered who she is and asks to meet Azi in person to help her find a refuge.

Azi’s fears about the real world lead him to refuse Sigma’s request, but minutes later his shed is visited by someone who seems to know all about him, and what he has been up to online, which would be sufficient to earn him a significant term of imprisonment. He is instructed to respond positively to Sigma, and thereafter is catapulted into a battle involving Gomorrah, a dark web marketplace, with very worrying implications for Azi personally and the real world generally.

In parallel with Azi’s run across the globe searching for the means to defeat the IR and their acolytes, there are chapters centred on a British IR volunteer in Syria which makes working there sound just about as horrible as you might imagine.

The book is an excellent grounding in the latest developments in internet wizardry including some wonderful stuff like pseudo-random numbers and their potential for predicting slot-machine pay-outs. Unfortunately, it also offers ghastly opportunities for those with horrible ideological views. As an irredeemable technophobe I have to say it confirmed all my worst fears, and the introductory remarks are so authoritative that it is clear Tom Chatfield knows exactly what he is talking about.

The author has combined all this technology with an excellent plot, full of twists and gripping developments, putting Azi to the test right up to the nail-biting finale. Of course he has access to other hackers, like some international secret club, to provide assistance. It was a surprise to find him performing so well in the real world, a nerd who turns out to have unexpected capabilities.