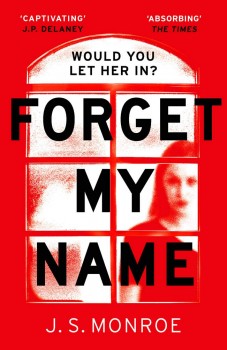 She has no name, no memory, just a train ticket to a Wiltshire village and a need to go home.

When the woman boards the train, leaving behind the traumas she has encountered at Heathrow airport, she cannot know that Tony and Laura have recently bought their idyllic Wiltshire village house just up the road from Tony’s café. All she knows is that a deep, unidentifiable need is driving her there.
When they open the door, she explains that her bag has been stolen, so she has no means of proving her identity. Worse, the woman has no idea herself who she is. But Tony and Laura take her in. They even take her to meet their friend and GP, Dr Patterson.
For now, Tony names the woman Jemma. She looks like a Jemma with a J. And it is easier communicating with someone who has a name. Unfortunately, he has chosen a name that reminds more than one person of a killer who used to live in the village. One who used to live in their house. One who disappeared off the grid several years ago.
Unreliable narrators and amnesia should be a recipe for a satisfying, multi-layered story – a tasty lasagne. Unfortunately, Forget My Name slipped off the plate and landed in a spag-bol heap on the floor because of the volume of indistinct characters, complicated sub-plots, unbelievable twists and general confusion.
The story is convoluted and unstructured. And as with an increasing number of suspense novels, there is a degree of trickery through the inclusion of several semi-related doubtful storylines and gargantuan conveniences.
I stopped watching soaps around the time they began vying for audience loyalty by jumping on the major-disaster-or-murder-a-month bandwagon. That is what Midsomer Murders is for, not Coronation Street or Emmerdale. Forget My Name is like those programmes; a soap in a book, without the airbrushed characters – and with an all too familiar premise.
In amongst the spaghetti of deception and revenge, we obviously have a serial predator. But we also have a long-lost daughter, a mentally ill woman, a conspiracy theorist and more coincidences than is humanly possible in one village. And don’t forget the seahorses.
This is not a book where common sense or the suspension of disbelief will survive. That a young couple would take in an unknown woman, supposedly suffering with retrograde and anterograde amnesia, rather than taking her straight to the hospital or police where she could get the help she needed (or even slamming the door in her face) strained against my suck-it-up-in-the-name-of-fiction cells. That a couple of hours later, the husband is off on a jolly with said woman to the pub quiz, had me raising eyebrows and rolling eyeballs. And then the story started going downhill!
Dialogue is generic and introspection. Description is reasonable, and the overall quality of writing is passable. There is a good sense of time and place and attention to atmosphere. It is the story and plethora of unlikeable characters that are at the heart of this book’s problem. Both could do with paring back to the essentials. It’s good, easy-reading escapism, if you leave your suspension of disbelief at the door.