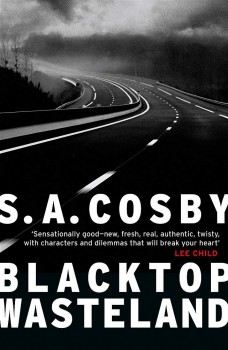 Beauregard ‘Bug’ Montage tries to extricate himself from money problems by driving for a jewellery heist, but the outcome threatens to destroy his life.

Beauregard ‘Bug’ Montage runs a garage in Richmond, and after some youthful brushes with the law is trying to run a straight life. But new competition is cutting into his income, which falls well below family expenses. He reluctantly considers capitalising on his driving expertise by taking on a job as a getaway driver, despite his wife’s fears about the risks.

The one asset that Bug does possess he is unwilling to sacrifice: his Plymouth Duster, a muscle car he acquired from his father, who left town when Bug was a child and has never been heard of since. Bug still idolises his father but is well aware that his disappearance blighted his childhood, and the life of his mother. Hanging over his life is the possibility that he will end up making this a family tradition.

Despite his professionalism as far as his contribution is concerned, the driving job never looks like running smoothly given the involvement of Ronnie Sessions, a white boy known primarily for his 23 Elvis tattoos. Far worse, it is revealed after the event that the jewellery stolen was taken from ‘Lazy’ Mothersbaugh, a very nasty gangster with a gang of psychopaths working for him.

It doesn’t take long before Mothersbaugh finds who made the heist and demands that in recompense for the injury done to him Bug and Ronnie relieve his major competitor of a shipment of stolen platinum. Bug is confident he can organise this but is convinced that Mothersbaugh will still take revenge afterwards. Ronnie is not reliable either. Bug tries to allow for every future eventuality – but knows that the chances of his survival are slim.

Bug is easy to empathise with, a man with an eidetic memory, intelligence and organisational skills, a decent man who nonetheless has a violent side. His struggle to protect his family and friends is complicated by his feelings about his father.

This emotional context plays well against the relentless action which unfolds. There are frequent brutal episodes which underline the unforgiving environment which the protagonist is attempting to negotiate. Enough of this has rubbed off on Bug for him to respond aggressively when challenged; he is very much a macho sort of hero.

Part of this is Bug’s enthusiasm for cars and driving, with skills making him a legend in the south east of the US. The book begins with a late-night street-race and the police chase after the jewellery heist has to be one of the most exciting in print. Whether you think his skills are the true mark of a man or an infantile preoccupation is of course a matter for debate, but it sure makes for a wild ride.