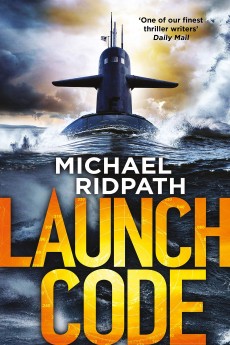 An order for a nuclear first strike in the paranoia of the 1980s Cold War threatens world apocalypse. Thirty-five years later, as a writer threatens to reveal what really happened, the family of a key player in the drama is threatened by unknown forces trying to keep the incident secret.

How Michael Ridpath’s former life as a city bond trader prepared him to write about life on a nuclear submarine is difficult to imagine. But after his Fire snd Ice series featuring Icelandic detective Magnus Jonson; eight financial thrillers and a spy novel set in 1938 Berlin, this mix of techno-thriller, espionage and domestic noir is by far his best yet.

Thought-provoking and enjoyable, this story of a near-apocalyptic incident involving an American missile submarine at the height of the paranoia of the 1980s Cold War and its effect on the family of one of the key players more than 30 years later, recalls in parts the classic thrillers of Alistair MacLean and Jack Higgins.

It’s a well-crafted and ingenious mystery, tightly plotted, compelling and contemporary. But for all the research Ridpath must have put into the history – there were at least nine real incidents involving US ‘boomers’ – sharp-eyed readers will detect holes in its credibility.
The ballistic missile submarine Alexander Hamilton receives a launch order for three of its Polaris weapons in a limited first strike against Soviet targets. While procedures are accurate, the scenario stinks – even to an ex-army ‘grunt’ like me!

Orders for a partial launch by one boat are, to say the least, questionable, bordering on senseless. For a first strike to succeed in destroying much of Russia’s response capability, all boats on patrol in the North Sea and North Atlantic would have launched their full missile complement. That fact alone should have alerted the Hamilton’s captain and executive officer to question the release message. Nevertheless, they decide to follow an order which can only lead to nuclear war!

Two fairly junior lieutenants first argue a case, then take direct action to avoid the end of the world. In the chaos that follows the weapons officer, the key player in any launch, is hit on the head with a spanner and later dies.

More than 35 years later, former Lieutenant Bill Guth, now a retired successful businessman and multi-millionaire, assembles his family and friends to celebrate Thanksgiving at the Norfolk coastal complex he calls home. Only his eldest daughter knows much of his past – told parts of the story by her now dead peace campaigner mother – of the fatal blow he administered, the massive cover-up which led to the junior officers’ honourable discharge and a wall of secrecy which has kept the incident from the public view.

That wall now looks likely to be breached when an investigative English historian turns up, eager to uncover the truth about the near-apocalyptic incident. In the best traditions of the Silent Service, Guth refuses to be drawn.

Later the same night the man is found murdered in his hotel room – after a visit from Guth’s eldest daughter. A web of lies, mysteries and family secrets begin to emerge as her English husband Toby desperately tries to prove her innocence.

The modern sections of the story are more like a traditional thriller. Everyone is under suspicion and multiple twists keep the reader on their toes. The ‘outsider’ Toby is a good way to introduce the Guths, but readers may struggle a little with the family drama or to connect to other characters, especially the conflicted Alice. The constant mention of a family facial characteristic also becomes more than a little wearing.

All told, though, it’s a good read – a detailed and thought-provoking picture of Cold War navy life and an ingenious dark and tangled web that will keep the reader gripped and guessing to a dramatic and unexpected end.