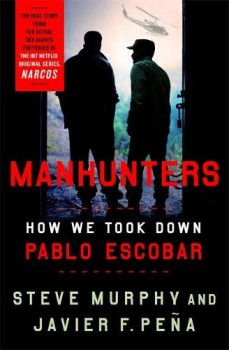 The true story of two agents of the US Drug Enforcement Agency, in the words of the subtitle, telling ‘How we took down Pablo Escobar’.

The name Pablo Escobar will be familiar to anyone who takes an interest in the trafficking of cocaine from Colombia, the pre-eminent worldwide source for the drug. The authors of this book, one-time employees of the DEA, were part of US efforts to combat the supply of cocaine to the USA, in which Escobar at one time played such a key role.

The contribution of Steve and Javier (the names above each chapter) to these events was limited to about 18 months in the early 1990s, but the book begins with lengthy personal histories and the book is halfway through before we get to Colombia, and Escobar is first mentioned. The two acknowledge the help of a writer, Isabel Vincent, who makes these preliminaries quite readable, albeit of only minor interest.

The book seems to have arisen as a result of the Netflix decision to fund a series, Narcos, loosely based on the experience of the two during the hunt for Escobar. Narcos proved to be popular. I regret to say, however, that the book fails to live up to the excitement of the TV version.

The pair clearly deserve credit for the dangers and discomfort they experienced. Escobar had hundreds of teenage sicarios keen to take the bounty offered for kills on his hunters, and both received warnings of actual threats from time to time. They also shared the hardships of the locals in an attempt to foster the cooperation so necessary to achieve success.

But as the two freely admit, the Colombian National Police (CNB) deserve the lion’s share of the credit. Literally hundreds had fallen in the fight against Escobar, and although US soldiers were at risk, the threat of massive retaliation if just one were to have been killed was enough to give real protection. And, of course, their personal security was helped by the resources made available.

However, the real problem is that unlike in the TV version, we only hear about Escobar at second-hand, until his final days when he is caught on radio imploring his remaining friends for help. In addition, the work of Steve and Javier is not specified in sufficient detail to make it interesting. Coordinating, collating and reporting intelligence is no doubt vital to the task but does not make for great excitement. The overall impression is of close interest in the hunt but few occasions of personal involvement in dangerous confrontations.

Escobar was a thoroughly nasty guy and following his death in a shootout with the CNB the number of murders in the country dropped dramatically. The traffic in cocaine continued, however, with minimal disruption, the cartels in charge having learned from Escobar’s experience to keep a low profile and co-operate better with politicians.