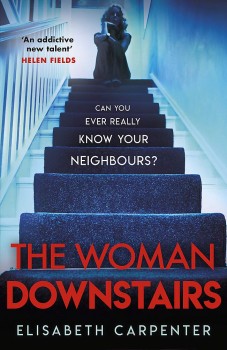 When the bailiffs are called in to a ground floor flat, they make a gruesome discovery. And the residents of Nelson Heights discover that they know very little about their neighbours.

Two female characters take it in turns to tell the story which is mostly set in the block of flats in Preston where they both live.  The story takes off when a rotting corpse is discovered on the sofa of a ground floor flat and it's obviously been there for some months or even years. But the television still flickers in the corner and a few presents lie unopened on the floor.

A couple of uniformed officers and one detective are called to the scene but there is very little police presence in the book as a whole. I would have preferred to hear about the ongoing enquiry which might have added some background solidity to the story. As it is the drama unfolds through the eyes of the two women and through them we are introduced to a large cast of suspects as, of course, the rotting corpse turns out to be a murder victim.

Both of the storytellers are well-drawn characters. Sarah is a single mother with a boyfriend who has links to the deceased and is acting suspiciously. Her ex-husband is a policeman, so we do get a few procedural titbits thrown in – and that's useful for Sarah too as she is a trainee journalist and she takes up the investigation where the police are strangely absent.

Laura, the second voice, is a curious girl who has been damaged by bullies at school. She was abandoned by her mother aged 11 and has spent her teens and 20s looking after a terminally ill and flat-bound father. She is a pretty and intelligent young woman who seems hopelessly at sea when she ventures out into the real world. But at the same time, she makes a series of very funny and astute asides which liven up the proceedings no end.

The book is divided into two parts and there is a development at the end of part one which came as a pleasant surprise to me – probably because this wasn't trumpeted on the book cover as is the case with so many current publications. The story is well plotted, but my main quibble is with the number of characters who all seem to have something to hide. There are several scenes in which someone displays very strange behaviour (thinks – is it him/her?) which then fizzle out without any explanation. Just about every featured person has a motive and opportunity. The author lays out so many red herrings that the story has a permanent smell of fish! Personally I would have preferred fewer suspects with more fully rounded personalities – it just felt too complicated at times.

This is the fourth book from northern crime writer Elisabeth Carpenter. I frequently forgot that this story is set in Preston as this didn't really come through in the writing. In my imagination we were in an anonymous flat-dwelling area of London and I was always surprised to be brought back to Lancashire. However, this is a book you can read very quickly and I did really want to know what had happened – and all is revealed satisfactorily in what is a rather poignant ending.