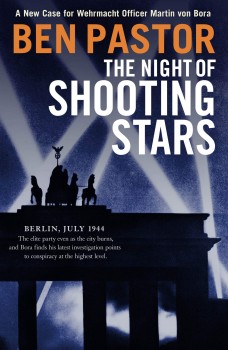 The Night of Shooting Stars

Lieutenant-Colonel Martin von Bora is in Berlin in July 1944, directed to investigate the murder of a prominent clairvoyant, but the rumours of political conspiracy suggest that Bora himself is at risk.

This is the seventh book in the Bora series. He’s now only 30 but after five years of war in various theatres he is weary and suffering from various wounds including the loss of his left hand. He is serving on the front line in Italy but returns to Berlin for the funeral of an uncle, probably a suicide in the face of Nazi enmity for his liberal views.

A summons to the office of Arthur Nebe, chief of the Criminal Police, is unexpected and Bora wonders whether he too will fall victim to his political unreliability. To his surprise, however, Nebe asks Bora to head an investigation into the recent murder of Niemeyer, the ‘Weimar Prophet’, a clairvoyant who numbered some politically significant persons amongst his clients.

A shortlist of four suspects has already been compiled and Bora is unsure as to the purpose of his appointment. He is assigned a driver, Grimm, who sticks to Bora like glue, and is presumed to be reporting back every step Bora makes. Nonetheless, Bora proceeds with an investigation which soon establishes that the motive for the killing may be other than the personal animus suggested by those already identified.

Almost as soon as he arrives in Berlin, however, Bora perceives signs of tension in his army colleagues and is approached by an old boss who seems to think Bora knows about a coup that’s widely rumoured to be being planned. In fact, Bora knows only what he guesses from the most cryptic hints, although he approaches Stauffenburg at one point, who as history records was crucial to the plot against Hitler.

Whether his actual innocence of the plot will save him is doubtful; his record makes it likely he will be regarded as culpable regardless of the outcome. As he pursues leads to solve the murder, it also becomes clear that the crime is linked to the political machinations in progress, and that he will need to be very careful in announcing his findings.

Bora is a fascinating character, who has the sensitivity of his biological father, a concert pianist, allied with the rigid moral compass of a military aristocrat, derived from his upbringing. While he has only contempt for the Nazi regime, he has little tolerance for political conspirators either; his rebellion has emerged in action where he is able to prevent the worst of Nazi excesses.

Ben Pastor as usual unerringly guides the reader through the dark politics of the Nazi state, providing a subtle appreciation of the flow of power between the various competing authorities. The war has clearly been lost at this stage, and the peculiar state of mind of those living in the battered city is brilliantly conveyed. I liked this as much as any in the series; history realistically recreated around a character that you cannot help but like.