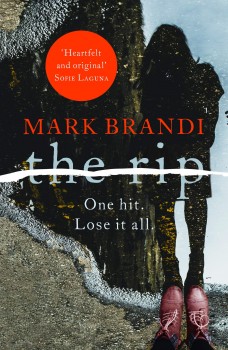 A young woman living on the street comes under threat when someone new shows up and disturbs the precarious stability of her life.

The Rip is narrated entirely by a young woman whose name appears only in the final pages. She is living on the streets of Melbourne and is a heroin user. Despite her problems she has achieved a degree of security: she has a friend, Anton; a dog, Sunny; and there are sympathetic people from the Salvo and other charities, and from the police, who keep an eye out for her.

Life takes a progressive change, however, when Steve turns up. Steve has a flat and a ready supply of drugs, although the smell coming from Steve’s padlocked room is worrying. A neighbour asks about Mary, a girl previously resident, and Steve’s answers are unconvincing. Also, Steve has some kind of a hold on Anton, pressuring him into ‘burgs’ which produce little by way of reward but could get Anton into big trouble.

The woman is unhappy with the change in her life; she would like to return to the existence she had before Steve’s arrival, but she seems unable either to draw the obvious conclusions from the evidence in front of her, or to express her will and extract herself, Anton and Sunny from the situation. Things continue to slide and it is only a matter of time before her worst fears are realised.

This is a tough read. Life on the street is not for the fainthearted, and it is evident that every day is a struggle. Occasional prostitution and begging to find small amounts of cash, obtaining a supply of heroin that won’t kill you, facing down the suspicion or even worse, sympathy, of people on the street, all take their toll. Keeping clean is a particular problem which it is easy to feel would be intolerable.

From the reader’s perspective, however, greater tension comes from the pertinence of the narrative about what is happening and the woman’s inability to take action. It is clear from her observations that she has all the evidence she needs, that she has well-founded suspicions about Steve, but her readiness to defer taking her thoughts to their logical conclusion, not to mention acting upon them, is immensely frustrating.

Little is said about the background of the woman, or Anton, just a glimpse of broken homes and a lack of support. Her mental attitude, however, comes across very convincingly; frequently she comments adversely about the people who treat her badly or indifferently, but then will add ‘fair dinkum, tho, I reckon’, an acceptance of unworthiness. Although her seeming carelessness is hard to take – about herself, her friend, and especially her dog – it is the woman herself who will suffer most from her failure to focus.

As with Mark Brandi’s first book, Into the River, The Rip is a powerful evocation of someone whose weakness in confrontation with evil makes for a difficult read, although one that’s horribly convincing.