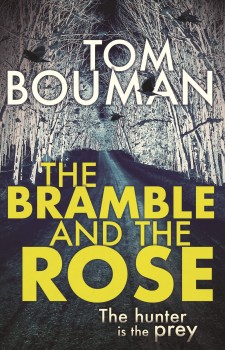 The Bramble and the Rose

Policeman Henry Farrell is called in when a body is found, suspected to be the victim of a bear. Events prove there is more than one predator in the woods.

Henry Farrell constitutes the one-man police department for the rural hamlet of Wild Thyme, Pennsylvania, as well as being a carpenter and fiddle player in a country band. His recent marriage and his increasing familiarity with the area has brought some stability to his life and an increasing confidence.

Things take a dark turn, however, when the mutilated body of a man is discovered on a track in the woods. There are signs that a bear was involved, and Farrell helps to track the animal: once a bear has a taste for human flesh it would be dangerous to have around. But the victim has some wounds inconsistent with a bear attack.

The man is eventually identified and proves to have been in the area at the request of a woman with links to Farrell. Although the connection is now one which Farrell recognises as a mistake and is keen to repudiate, when the woman becomes a victim herself Farrell finds himself suspected and in danger of arrest by the state police.

By this time, however, Farrell’s nephew, a disaffected schoolboy, has gone missing. Farrell knows the places where he is likely to hole up and suspects he is at risk from some ill-intentioned characters known to be around. If he is to save his nephew, he has to use all his local knowledge to find the boy before he becomes another victim.

The Bramble and the Rose maintains the high standard of the first two outings for Henry Farrell. He’s a thoughtful and gentle man and comes across as very likeable, with none of the bombast to which policemen in small communities can be prone. The impression is given of a substantial web of family and friends who Henry appreciates for individual qualities.

The writing is characterised by excellent pacing and authentic dialogue, but what makes Bouman stand out is the gaps he leaves, which the reader is called upon to fill for themselves. One particular striking example is Farrell’s predisposition to spend nights out in the bush for extended periods without any report of comment from his new wife, or any apparent discussion between them on the subject.

The revelation of the narrative through dialogue and direct concise depiction of action, with no rationalisation, and limited explanation of motives by Farrell as the narrator, gives the writing a literary feel which is somewhat rare for a police procedural. The style falls into an easy rhythm, and the picture of rural life and genuine values are ones which many will appreciate.