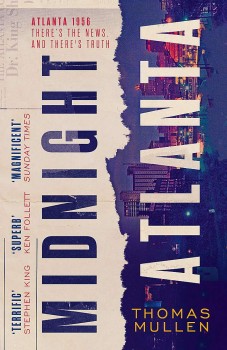 Atlanta 1956. When the black owner of the Atlanta Daily Times is shot and killed, reporter Tommy Smith is determined to find the culprit.

This latest book by Thomas Mullen continues his excellent series set in post-war Atlanta, exploring an issue which the Black Lives Matter movement has brought once again to prominence. Set in 1956, it presents a picture of unfairness based on colour that is repugnant to any unbiased reader.

The characters who live in this recreated world are not mere cyphers, however, but drawn convincingly, with specific practical constraints arising from the local environment. Many of the characters have appeared in previous books in the series, including the chief protagonist here, the ex-cop and now a reporter Tommy Smith.

Tommy is at his office desk asleep late at night when he is awoken by a gunshot. Investigating, he finds his boss and editor Arthur Bishop shot dead. He calls the police but knows from experience that a homicide will be dealt with by white officers who are unlikely to put much effort into the case. His expectations are realised when they first aggressively question Smith, and subsequently arrest Bishop’s wife, with minimal justification.

Smith decides to investigate the murder himself, using his experience and the occasional hint from his ex-colleagues, including Boggs, another character who has featured in the series. Also involved in the case is McInnis, the white sergeant who heads the small section of black officers in the city. McInnis has been on a journey since his appointment: initially as prejudiced as most, he has come to respect the men he supervises, although his attitudes do him no favours with his bigoted neighbours and contemporaries in the police.

In his research Smith comes up against not only the white police establishment but also the FBI and Pinkerton agents, whose interest is initially unclear. Unravelling the full story eventually calls for an exploration of the politics in the early black liberation struggle, aspects of real estate dealing in Atlanta, and a particularly horrifying instance of white-on-black violence.

The ramifications of colour prejudice are laid bare; the ways in which it complicates life and adds to the problems of a group already economically disadvantaged are explained in fine detail through episodes in the lives of Smith, McInnis and other characters. Anyone who has read Kate Werran’s recent book An American Uprising about an incident involving black GIs stationed in England in 1943 will find much here that is familiar.

It says much about the leading characters in the book that, despite persistent opposition, progress is made in uncovering the chain of events which led to Bishop’s death. With limited resources, Smith makes clever inferences and doggedly pursues key lines of enquiry even after a savage beating, and the ever-present risk of more of the same from the authorities supposedly constituted for his protection. This is a gripping story told with impressive skill.