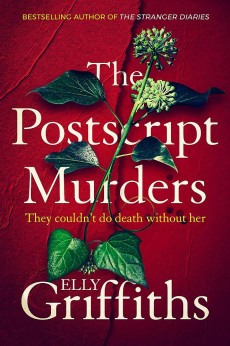 Ninety-year-old Peggy has two main interests in life – observing the comings and goings beneath her bay window in Seaview Court and murder.  So when Peggy is found dead in her favourite chair, notebook by her side, it must surely be from natural causes – mustn't it?

Elly Griffiths' second standalone murder mystery once again features Detective Sergeant Harbinder Kaur. She is an interesting lead character – 30-something, gay but in the closet with the door slightly open and living with her Sikh family over the shop. She’s shamefaced about still being with Mum and Dad but likes the security. And she is focussed and intelligent and proud of her professional achievement. Her sidekick is macho man DS Neil Winston who Harbinder likes to imagine as a woodland creature – sly, slightly stupid but ultimately loveable.

There are many comic moments in this very likeable book. It’s set in Shoreham (superior to neighbouring Brighton riff-raff) and encompasses several crime genres, taking in the crime writers' fraternity, literary festivals, suspicious foreigners, the golden age of crime writing and neglected classics.

A cast of (very) colourful characters include a trio of sleuths who had befriended 90-year-old Peggy in Seaview Court – fellow resident Edwin, a gay ex-BBC producer (and therefore quite possibly a spy in the past); beautiful Ukrainian cleaner, Natalka, who has a secret history; and ex-monk Benedict who runs a coffee shack on the seafront opposite the care home. These unlikely comrades enlist the help of DS Kaur when they suspect foul play in the death of their friend.

The person who links these characters together is Peggy Smith – herself part cosy Miss Marple, part retired Mata Hari – who spends her days in an armchair at her bay window making notes on the passers-by. After her death it becomes apparent that she had a very sharp mind, a passionate interest in murder and had built up a reputation as a 'murder consultant'. This involved passing tips to well-known writers on how to spice up their plots with ever-ingenious ways of despatching their victims. Her room is full of crime books and most of them carry a cryptic dedication to Peggy such as 'PS for PS' (thus the title of the book). If you can get past this improbability, then you are in for a very enjoyable read.

After Ukrainian cleaner Natalka finds Peggy dead in her chair, still seated at the window, she immediately suspects murder (it's that kind of book). DS Harbinder Kaur is called in and the corpses start to pile up. The action moves swiftly from the south coast to a literary festival in Aberdeen and while enjoying the thrill of the murders, we also become more involved with our trio and DS Harbinder.

Elly Griffiths writes so well about her people, with real warmth and wit, and the story zips along with such a lightness of touch. Sometimes, especially towards the end, if feels as if there are too many themes, too many interesting characters and too many murders (if that is possible!) But it is all so entertaining that you might as well go with the whirlwind.