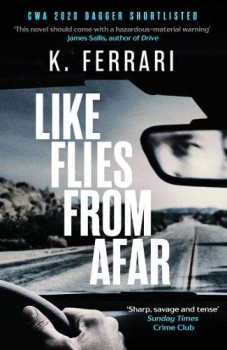 Self-made businessman Luis Machi has made plenty of enemies, but who dislikes him enough to leave a body in the boot of his beloved BMW?

Luis Machi is a rich man, owner of a thriving Buenos Aires club and investor in a number of illegal and disreputable enterprises. He loves his wealth and takes great enjoyment from indulging himself in the very best of everything that life has to offer. Demeaning others to emphasise his superiority adds greatly to his satisfaction.

Life takes an unexpected turn, however, when his flash BMW gets a puncture on the motorway and when he opens the boot to find the spare he finds a body with its face blown off. Immediate disposal is complicated by the fact that the corpse is handcuffed to the car with a pair of furry pink handcuffs with which Machi is very familiar.

Machi then spends a nightmarish day dodging police and a million flies, acquiring suitable tools and looking for a quiet spot where he can safely dispose of his unwanted burden. While he does so, his mind ranges among the many people who might be sufficiently aggrieved by his behaviour towards them to complicate his life in such a gruesome way.

There is his wife, who would most easily have access to the handcuffs, but surely she would not have the nerve? Maybe his security chief, Pereyra? Or the ‘gorilla’ who watches over the garage door at the club? Perhaps the employee fired after eight years for actually taking an earned day off? These and various other possibilities pass through Machi’s mind as he grapples with the immediate practical problem of the messy item in his boot.

Machi’s ruminations and occasional episodes from the perspective of those who have suffered from his determined grab for wealth illustrate some aspects of Argentinian society which you would not expect to see in publicity for tourists. Machi lives in a gated community where the rich are protected from the street violence which others face as a daily challenge, moving to and from jobs unprotected from the arbitrary demands of employers, something with which his staff are entirely familiar. The police are corrupt and offer no recourse.

The disgust and horror at the unfairness and sheer cruelty of all this is balanced by the humour at Machi’s predicament, and his ineptitude in the face of the unfamiliar stress imposed by his unknown nemesis. And just when he thinks he has got things sorted, there is another surprise waiting for him.

This is a dark and exhilarating ride through Argentina’s barbarity and sleaze, encapsulated in the experiences of a single degenerate having a very tough day.