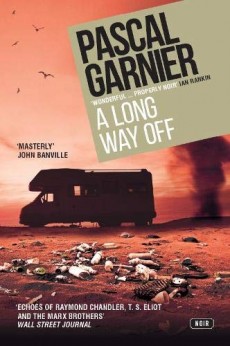 A Long Way Off

Marc dreams of freedom and abandons his quiet life for a trip with his daughter Anne, but things move in a rather unexpected direction.

This is Pascal Garnier’s last book, published shortly before his death in 2010. As ever, he takes a familiar domestic setting and populates it with recognisable characters whose apparently minor quirks lead to a surprisingly rapid descent into the weird.

Marc Lecas, a 60-year-old, lives with Chloe, who enjoys restoring bric-a-brac she buys at flea markets. Marc, however, finds the profusion of items around him bemusing. Real life is in many ways uncongenial and his thinking drifts in a rather random manner, although he becomes preoccupied with the idea of escape.

Marc has a daughter, Anne, by his wife from whom he is long separated. Anne is a long-term resident at a psychiatric hospital. Marc makes a weekly visit and proposes that the two go on a trip. Anne agrees, and the two make off to the seaside town of Le Touquet, accompanied by Marc’s new acquisition, the cat Boudu.

The three stay briefly at Le Touquet before moving on to Agen, a town famous only for prunes. At some point they trade in Marc’s car for a camper van. At the places they stop unfortunate events occur; Anne briskly dismisses these as coincidence, but Marc soon has suspicions although he is seemingly unable to affect the pattern of events.

Marc and Anne on the face of things appear normal; a little odd perhaps but people you wouldn’t give a second glance at if you saw them on the street. There is clearly something missing, however. Anne has a very straightforward attitude to life but entirely lacks any kind of empathy for others. Marc dimly recognises that there is something wrong about the number of bodies piling up in the rear-view mirror, but is unable to formulate any kind of solution.

The trail of destruction they leave behind them comes across as both horrifying while also very funny. Marc scratches himself on an item that Anne has appropriated, and his finger becomes infected. After an extended period of neglect, death from gangrene appears increasingly likely until Anne is persuaded to use a breadknife, in a scene both gruesome and hilarious.

The story is far-fetched, yet Garnier’s matter-of-fact prose makes the story entirely convincing. From the beginning the story takes off in an unexpected direction, while at the same time developing in a seemingly inevitable manner to reach its ghastly conclusion.

Garnier’s work is as noir as it gets, often macabre, but written with such precision and style that there is plenty to admire even if you find the dark side of things difficult. Appreciation comes even more easily if you have a warped sense of humour.