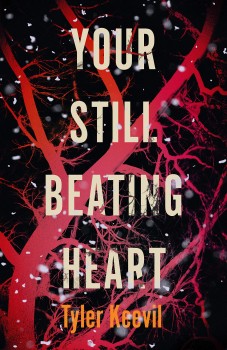 After the death of her husband, Eira Vaughn is adrift. But her life is given new meaning as a result of a chance encounter in Prague.

One unusual feature of this book is that the story is told in the second person, and it is well into the tale before the narrator is revealed. The ‘you’ whose story they lay out is Eira’s, a Welsh woman recently widowed by a random stabbing on a London bus.

Seemingly numbed by this unexpected bereavement, Eira leaves London for Prague, takes a cheap room and wanders the streets pondering the vagaries of life. After a while the venturous side of her nature asserts itself and she takes up an offer of employment arising out of a meeting on her first arrival with petty criminal Mario, who is impressed by her coolness when confronted with a mugging.

The job turns out to be the delivery of a package across EU borders, in exchange for another which she will return to Prague. The pay is generous, but the penalties for non-performance are dire. It is already too late to back out, but Eira is intrigued enough to continue in any event. Mario calls her the ice woman for the nerve she demonstrates under pressure.

Eira crosses the border into the Ukraine to deliver a suitcase, but the return package turns out to be a person, who it is intended will be used in the most horrific way. Eira takes the decision to abrogate the contract and go on the run, knowing that the pair risk death and worse if their resourceful and ruthless pursuers catch up with them.

Eira is entirely central to the story and some of her decisions appear very chancy on the face of it, so credibility depends greatly on whether her character is portrayed convincingly. I am happy to say that the author achieves this. Eira comes across as a person of little sentimentality, who thinks deeply, who is well aware of the wild side to her nature but is confident in her ability to cope with what that might bring.

In the opening chapters, the reader may assume that Eira’s retreat into herself is the dislocation of loss, but it becomes clear that she is in fact very resilient. Her mental review of her past marriage acknowledges both the strengths and weaknesses of that arrangement, including her abandonment of a career as an actress and the constraint of the more audacious side of her nature.

Eira uses the few contacts she has to engineer an escape but is always worried about betrayal. Her intrepid side is exploited to the full in the decision to go on the run, and the final confrontation is full of drama.