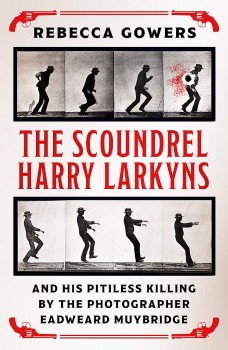 A 140-year-old cold case investigation into a true crime of passion – the murder of bon viveur and conman Harry Larkyns by one of the fathers on modern cinema.

On the night of October 17 1874, at a mining camp in Calistoga, Napa County, California, Eadweard Muybridge, the pioneering photographer and one of the founding fathers of the film industry, ambushed and shot dead Major Harry Larkyns. Muybridge fired his Smith & Wesson revolver at near point-blank range from the cover of the dark, while his victim, a decorated 31-year-old hero of the Franco-Prussian war, was silhouetted against a lighted doorway.

Muybridge made no attempt then, or later, to deny that he had carried out a deliberate act of murder. The sheriff who arrested him noted he was ‘very cool for one who had just killed a man.’ Yet astonishingly, four months later, he was acquitted in contravention of all existing law after a farce of a trial in which his two defence counsel broke almost every legal rule. A rural jury, after initially failing to agree, decided that they could not convict as they would have all done exactly the same in similar circumstances! Reporters said the courtroom ‘shook with applause.’

This tragic and astonishing case is now only a footnote to Muybridge’s life story. He was to become famous for his photographic motion studies of horses and developed the zoöpraxiscope, the first device to project moving pictures.

English-born in Kingston upon Thames, he was an arrogant and eccentric man whose personality was said to have changed and become unstable after he sustained serious head injuries in a stagecoach crash in Texas in 1860. He spent the following years recuperating in England, taking up photography, learning the wet-plate collodion process and securing at least two British patents for his inventions.

Muybridge returned to San Francisco in 1867 and by the following year his striking photos of the Yosemite Valley had made him world-famous. His eccentricity extended to regularly changing his name to suit whatever country he was in, finally settling on Eadweard, an Anglo-Saxon affectation that the San Francisco press mocked as a clear self-advertisement.

Until now little has been known of Larkyns, dismissed as a liar, seducer, cheat and rogue whose tales of his life before San Francisco were regarded as pure invention and hyperbole and considered heroic beyond the reach of credibility.

Now Gowers, a novelist and non-fiction author, always fascinated by 19th century literature, history and crime, has produced a compelling non-standard biography of this talented and remarkable young man – and a radical new exploration of his murder.

Her inspiration for a story that has all the inevitability of a Greek tragedy was the discovery that Larkyns – born Henry Larkins – was a distant relative, the brother of her great-great-grandmother. He was born in India in 1843 into a family who officered the India Company’s army or were noted sea captains, and he and his sister were brought up in England by relatives after his parents were murdered in the siege of Cawnpore in the Indian rebellion of 1857.

Almost inevitably he was drawn to the New World and at the age of 28 ended up as a widely respected and popular theatre critic for a San Francisco paper. But his lifestyle as a Bohemian rogue never changed, and he was described as the ‘prince of confidence men.’ It was there this beguiling reprobate met the beautiful Flora Muybridge, already on her second marriage – and for the first time in his life believed he had found true love.

The couple’s affair was hardly secret. With her husband often away on photographic expeditions, they were frequently together in public. Eventually she gave birth to a son, who Harry believed was his. Falling in love with another man’s wife and the doubt over the paternity of the child would seal his fate.

There’s much to enjoy in this painstakingly researched account of a forgotten ne’er-do-well – a story as eventful as it is tragic. No-one comes out of it well. Harry, however superficially attractive, is shown for what he was. Flora died alone, and badly, just nine months after his killing. Muybridge, whatever his achievements, is portrayed as the vengeful and arrogant man he was – quibbling over payments to support the boy who bore his name, and eventually abandoning him.

At times there’s almost too much detail which detracts from an otherwise brilliant 140-year-old cold case investigation into a true crime of passion. But this carefully constructed book finally puts the largely ignored, reviled and unlucky Larkyns’ side of the story. It’s well worth a read for anyone seriously interested in the genesis and effects of crime.