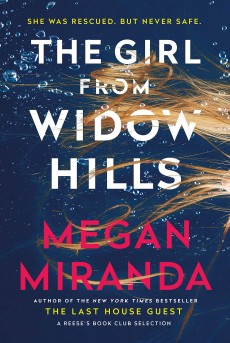 The Girl From Widow Hills

Arden left the story that defined Widow Hills, even though she was the story. She even left her name. But two decades later, her past is shadowing her, and her life is in danger once again.

Olivia Meyer is a 26-year-old administrator at a hospital in Central Valley, North Carolina. But two decades ago, she was the name on a nation’s lips; the little girl, Arden Maynor, who survived a three-day ordeal in the drainage system under Widow Hills, Kentucky. Her disappearance while sleepwalking in a storm and her subsequent miraculous rescue brought publicity, notoriety and enough money to see her through college and eventually buy a house.

But fame is a double-edged sword. And a name change can’t stop her anxiety when her childhood problem of sleepwalking returns after learning her mother is dead. However, this time, Olivia doesn’t fall down a drain – she stumbles over the body of a man. A man she will come to realise was not only part of her past, but also the reason she is here today.

Now, the edge of her land is a crime scene. Olivia, along with her aging neighbour, is a person of interest. Even she is not sure if she is innocent. To find out the truth about her past and about the dead man, Olivia must go back to her roots. And with her friends stepping away from her into the shadows, she is going alone.

This story is told from Olivia’s first-person point of view, interspersed with excerpts and transcripts from her traumatic past, including snippets of her mother’s heart-on-her-sleeve book. These snippets are, unfortunately, tautologic and slow the already ambling pace. And although this is a psychological thriller, Olivia’s introspections and repetitive explanations about her paranoia and anxiety (understandable the first time, thank you) slow the tempo further.

In terms of plot, The Girl from Widow Hill is a lightly veiled whodunit without the observation skills of Poirot. Megan Miranda throws suspicion on the small cast of friends, acquaintances and strangers around Olivia, with a relentless no-one-and-nothing-is-what-it-seems theme. But the red herrings have that giveaway fishy smell. Not exactly subtle.

That said, the author scooped me up on a wave with her ability to give character to the milieus and bring them to life. In some ways, the atmosphere Miranda creates with the various settings makes them more three-dimensional than the other characters. It certainly kept a current of cold air whispering over the hairs on the back of my neck and kept me turning the page.

Part of me connected with Olivia, but I did find her too self-absorbed. And her complete inability to assess people drove me scatty. Get it wrong once, that’s the stuff of good thrillers. Get it wrong twice, I shan’t come to you for advice on relationships. Get it wrong every time, and I start to think you are just plain stupid.

I would have liked more character development of the other key players. Rick, Olivia’s aging neighbour and Bennet, her closest friend, had plenty of time on the page, but I didn’t get the feeling they would leap off it.

The biggest disappointment was the ending. I liked the twists, even though I had second-guessed them. But the reveal was hurried, messy, and in places it necessitated re-reading to be sure of what the author had written.

This is not as good as All the Missing Girls or The Last House Guest, but Megan Miranda is an author I will stick with, and this is definitely an easy, fast-paced read.