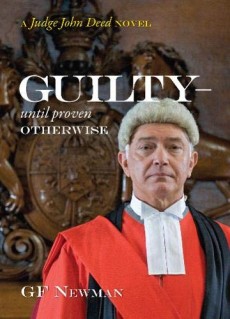 Judge John Deed finds himself doing battle with ministers of government and at personal risk in his determination to constrain the executive.

GF Newman has written a dozen novels, plays and films as well as the screenplays for the popular Judge John Deed TV series; he now features Deed in book form. Deed starts the book with three years’ seniority as a High Court Judge, and with a bolshie reputation from his time as a radical barrister when he frequently crossed swords with the police.

Deed has several cases before him, including a charge of murder against a Colombian woman, Mariana Ortaga, and her admirer Rupert Fish. Fish is being defended by Deed’s off-and-on QC girlfriend Jo Mills. Fish is said to have emerged from a cupboard where he was hiding to bludgeon a man engaged in sex with Ms Ortega. Jo, however, doubts whether he was even present; but such is his infatuation with Ms Ortega that he steadfastly insists that he was responsible.

Another case concerns the objection of Salibi, a Saudi citizen, to extradition to Saudi Arabia. The Government seem very keen that the extradition should go ahead, supposedly so that he should answer charges of sexual assault. However, it soon becomes apparent that Salibi was involved in negotiations over UK arms sales to the Saudis, and is making accusations embarrassing to the Government, in particular the Defence Minister James Pollock.

In fact, the two cases prove to be connected in the person of Pollock, and Deed is keen to have him in court to answer questions. Deed is satisfied that he is fully entitled to insist upon this but faces a Home Secretary who is determined to resist him. There is also Pollock himself, who hates Deed and has no compunction in using hidden resources to protect himself.

Various senior civil servants and police are co-opted in the plotting to gag Deed. When attempts to bribe him with a seat on the appellate bench are ineffective, an agent provocateur is sent in, and Deed is susceptible to the woman employed to tempt him, having had therapy for his sexual addiction. Even friends start to desert him, and it begins to look like he will be obliged to resign.

The slimy and corrupt politicians and civil servants at Westminster, and the ease with which the police are suborned, make this one of the most cynical portraits of power seen in fiction. Newman does not spare the legal profession either; Deed sneers at counsel whose objective is more about generating fees than establishing truth, and Deed’s fellow judges are very easily pushed around. None of this beggars belief, but does seem a mite unsubtle at times.

There is, however, plenty of great courtroom action, and if you enjoy snippets of case law in the area of protection of civil liberties under attack from heavy-handed government you may find this particularly interesting. The principals on both sides come across as privileged and arrogant, but then given at their rarefied heights, I didn’t find that difficult to believe.