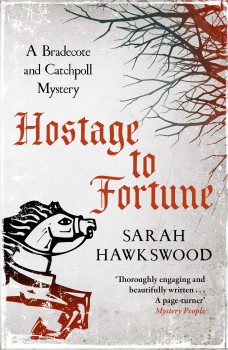 When the widow Worcester’s undersheriff Hugh Bradecote is to wed is kidnapped along with a group of Benedictine monks, Bradecote must fight his fears for their safety to rescue them from a psychopath who kills for pleasure.

In midwinter 1143, Worcester’s undersheriff Hugh Bradecote has brought the widow Christina Fitzpayne, soon to become his wife, to his manor for the feast of St Stephen. Preparations are interrupted when the county’s short-tempered Lord Sherriff, William de Beauchamp calls him back to Worcester to investigate a spate of poor-quality counterfeit coins. The moneyer, Osbern, whose dies have been copied, has been arrested and his journeyman found dead in the River Severn.

Bradecote and his sergeant, the close-mouthed, irascible, hard case Catchpoll, are given the task of hunting down the forgers so Christina decides she will join a party of Benedictine monks, headed by Father Samson, an envoy of the Archbishop of Canterbury, on a pilgrimage to the shrine of St Eadgyth at nearby Polesworth, to seek blessing on her marriage.

After M’Lady Fitzpayne, an independent and surprisingly modern woman, defies Hugh’s wishes and joins the monks, the party is captured by a renegade and increasingly unstable aristocrat who loathes the Benedictines and kills for pleasure.

Against a backdrop of a hard early January when even the mighty Severn is frozen, Bradecote and Catchpoll struggle to rescue Christina and the clerics in a frantic hunt across the frozen countryside.

There’s a visceral sense of how grim it is for the hostages to be dragged along snow-covered tracks, and through woods and fields knowing that shelter must be found by dusk if they are to survive the night. There’s also a strong sense of Bradcote’s mental strain as he tries to balance his original mission with his fears for Christina’s safety in the hands of a mad killer.

The task of making sure he does not crack under the pressure and helping him to pursue both investigations falls to the veteran Sergeant Catchpoll, a stereotypical senior NCO, who’s been there, done it all and will find a way out of the most difficult situations while keeping his more gentle feelings hidden behind a gruff exterior.

Rank and the rigid social structure of the time make it impossible for the pair to ever be friends, but as their partnership has progressed they are realising each other’s value and a mutual respect is growing.

The secret of Sarah Hawkswood’s success is that she keeps it simple. There are no great Holmesian leaps of intellect, no emphasis on noir – whether it’s action, reflection, deep personal feelings, description or even repeated gossip. Instead, there’s elegant and carefully chosen prose recreating a medieval world of which few will have any knowledge.

The stories are as much about personalities, relationships and ambitions as they are about murder and Hawkswood’s ability to bring even her most minor characters to vivid and realistic life gives them a must-read quality and as a result, Hostage to Fortune is wonderfully written, meticulously researched and completely compelling.