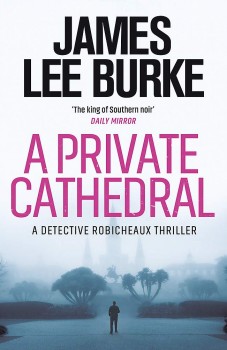 How does double Edgar Award and CWA Gold Dagger winner James Lee Burke go on churning out these compelling, socially aware and always provoking stories at the age of 83, when he really should take his main protagonist’s advice and put his feet up fishing the bayoux around New Iberia?

This latest episode, the 23rd in the tempestuous career of Louisiana cop Dave Robicheaux and the force of nature private investigator that is his friend Clete Purcel, reaches places untouched by any of the previous books. It is a brilliantly melded combination of gang warfare, a Romeo and Juliet story, a tale of Poe-like supernatural horror involving a centuries-old killer – and a damning condemnation of the rise of the American far right and its all-too-frequent exploitation for profit by giant multi-nationals.

Robicheaux and Purcel find themselves caught in the crossfire of Louisiana’s oldest and bloodiest gangland feud right on the own doorstep. Isolde Balangie and brilliant young guitarist and singer Johnny Shondell, the star-crossed teenage heirs to New Iberia’s major criminal operations, have run away together. Robicheaux is tasked with finding them, but discovers that 17-year-old Isolde is actually being being pimped out by her manipulative and perverted father to rival boss Mark Shondell.

When Robicheaux’s investigation brings him too close to both Isolde’s mother and her father’s mistress, the venomous gang boss orders a hit on the cop and his PI partner. To rescue the young lovers, and save himself, Robicheaux must face a terrifying paranormal assassin who inflicts awful hallucinations on his victims, and also continue his own battle with the demons of PTSD and alcohol abuse that have tormented him since his experiences in the jungles of Vietnam.

Burke has always been preoccupied with the twists and turns of the ongoing battle between good and evil and in more recent novels has increasingly concentrated on the spiritual confrontation, first introduced in the brilliant In the Electric Mist With Confederate Dead.

Robicheaux’s character lends itself to this. A product of that strange meeting of cultures – native Indian, Spanish, French and strict Protestant white – that led to the courtly but easily corrupted and cruel, Louisiana Creole society, he has always been an enigma, swinging to opposite extremes. And those who have visited his area of Lousiana will know that almost anything seems possible in the whispers, cold mists and the mangroves of night in the bayoux.

The plot is not over-complicated and the supernatural side to the story is on the whole sufficiently frightening while subtly enough handled to ensure the narrative drive. Everything else is consumed by the sheer poetry and brilliance of Burke’s writing. Whether it’s the astonishing and vivid descriptions of the New Iberia landscape, the explosive violence, Louisiana’s dark history, a witness to so much abuse from the brutality of slavery through to the destruction of nature to which rotting abandoned oil rigs bear vivid testimony, or the gulf in contrasts of the character of its people, he brings it effortlessly to life.

He brings this remarkable touch of poetry even to subjects such as violence and passion. More often and more tellingly, it is the poetry of valiant despair, the light of decency and honour for which the best of Louisianans are famed, guttering in the teeth of a malignant gale of greed, evil and cruelty.

One description of ex-alcoholic Robicheaux’s constant battle with drink is so moving, so vivid, it should be taught on every creative writing course as an example of how to express deep feelings. Music – usually sad or poignantly optimistic – is always a key component of any Robicheaux story. Dixieland jazz, the blues and the bitter-sweet bounce of Cajun songs have all played their parts. Again, the descriptions of the work of the talented young singer Johnny serve to build the atmosphere.

Basically it’s the same story. Dave and Clete – The Bobbsy Twins – against the forces of darkness, ever present, bubbling beneath the surface of the Bayou Teche. They may bend and stumble under pressure, but never quite crack and fall.

I regard A Private Cathedral as one of the best of the Robicheaux books in the last 20 years. The writing style is as excellent and resonant as ever, the characters compelling and the editing strong. True, there is some repetition, and the usual loose ends in the form of unanswered questions, but that should not detract from the brilliance of the basic story and the truly wonderful prose.