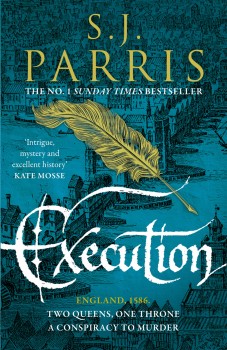 Renegade monk, heretic and philosopher Giordano Bruno goes under cover to expose a plot to assassinate Elizabeth I.

Guardian and Observer journalist Steph Merritt, writing as SJ Parris, once again immerses her readers in the noise, filth and danger of late 16th century London through the eyes of renegade priest and philosopher turned spy Giordano Bruno – where one false step in religion or politics can mean a grisly public death by hanging, drawing and quartering.

The former Dominican monk, an outstanding intellectual and free thinker – he pioneered mnemonics and may have been the first to propose the theory of an infinite universe – fled his Naples monastery as the Inquisition prepared to indict him for heresy. He wandered through Italy, Switzerland and France, where he tutored the dilletante King Henry III, before moving to England in 1583.

He had powerful friends to whom he dedicated his books – the French King, Sir Philip Sidney, a favourite of England’s Elizabeth I, the French Ambassador to her court, Michel de Castelnau, and tellingly Elizabeth’s spymaster Sir Francis Walsingham – and equally as many enemies, including the Church which excommunicated him and condemned him to death.

In his latest adventure, having spent some years in France, Bruno returns to England in 1586 with the shocking information that yet another band of English Catholics, backed by Spanish money and troops, plan to murder Elizabeth and release Queen of Scots from 20 years of imprisonment to take her place on the English throne.

Walsingham not only knows, but is also allowing the plot to progress, hoping Mary, with whom the conspirators are constantly in touch, will put her support in writing, thus convicting herself of treason. Bruno is tasked with going undercover to stop the plot. Either way a queen will die. He must make sure it is the right one for Walsingham’s patriotic Protestant version of England’s future.

This superb blend of history and fiction in a pacey and intricate thriller with an omnipresent sense of danger centres on the so-called Babington Plot – involving the wealthy, recusant young noble Anthony Babington and a group of his friends and masterminded by the fanatical Jesuit priest John Ballard.

The Italian Bruno is a great protagonist with many admirable qualities, but he is so believable because he is always fallible. Knowing he was a real person and that the story woven around real events – there is good historical evidence he had spied for Walsingham while staying in the French Embassy in London – just adds to the drama.

Despite a wide cast of characters, it’s easy to keep track because they’re so well drawn. The dialogue feels authentic, and the nods to future events are subtle.

The story is meticulously researched, with a strong sense of immediacy through the atmospheric sense, sights, sounds, and smells of Elizabeth’s London. Parris highlights the limited roles for women in society – although the spectacular introduction of the fiery Morisco beauty, healer and midwife Leila Humeya perhaps promises a greater female role in future stories.

Parris has created a character in Giordano Bruno who will endure – this is the sixth in a compelling series, but don’t worry if you’re new to him. This works brilliantly as a stand-alone although there is enough back story of the flashpoints and pressures of a religiously divided England and Europe.