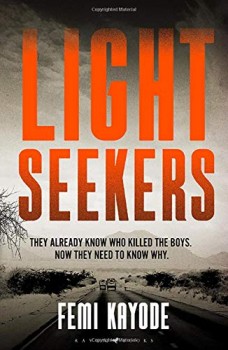 Three students are seized by a mob, beaten and then burned to death with petrol-filled tyres around their necks. Philip Taiwo is asked to explain this mob violence.

Philip Taiwo has returned to his native Nigeria with his lawyer wife Folake and teenage children after studying in the US for a doctorate in crowd behaviour and also working with the San Francisco police department.

He is persuaded by his father, whose friend Emeka is father of one of those killed, to investigate mob violence in the small town of Okriki near Port Harcourt when three students are seized by a crowd, beaten and then burned to death with petrol-filled tyres around their necks.

Taiwo flies from his home in Lagos to Port Harcourt. Chika, an assistant provided by Emeka, steers him through the primitive airport facilities and through the complexities of paying off police at various checkpoints on the drive to Okriki. As they commence work, they find plenty of curiosity from locals which quickly turns to antagonism.

The generally accepted theory about the events which led to the death of the ‘Okriki-three’ is that they were robbing another student, and that scandalised nearby residents took matters into their own hands. Taiwo attempts to get to the detail of what actually happened and finds several curious facts. The roadside market on the path the victims were dragged to execution has been completely cleared. A policeman, who is said to be one of the mob, has been posted elsewhere and is unavailable for interrogation.

The role of the people thought to have triggered the event is also shown to be different from the authorised version. However, local hostility grows and Taiwo and Chika’s progress is slowed as they come under threat. Readers get a hint as to why from occasional chapters in italics, giving the thoughts of a very disturbed person who is using social media to generate discontent for their own warped ends.

This tale is told in the present tense throughout, and gives a picture of Nigeria from a Nigerian, albeit one who has become accustomed to life in US. While much of this is depressing, given that the country has wealth sufficient to make life a lot better if properly organised, it is interesting that Taiwo’s return is at the insistence of his wife who is disgusted with what blacks in the US have to put up with.

The crime story is topical in that concern about the manipulation of social media by those with an axe to grind is very much in the news. If it can affect the outcome of elections or referendums in societies composed of people alerted to manipulation, it is no stretch that less well-informed populations will be at greater risk, so the basic premise of the plot is hardly far-fetched.

What I found less convincing is the link between this influence over public perceptions and the ease with which characters of substance are persuaded to abandon civilised behaviour. It did, however, add a sense of great menace, the end result being one in which the fate of the three students seems to be only a minor footnote.