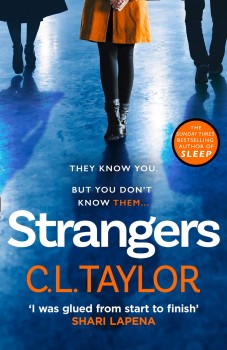 Ursula, Gareth and Alice are strangers. But over the course of the next few days, they will realise they need one another to stay alive.

Ursula used to be a primary school teacher. Now she is a loser, a bottom feeder who would rather forgo her friends than stop stealing things she doesn’t even need let alone want.
Gareth works in the Bristol-based Meads shopping centre where he is a security guard. At night, he is a carer for his mum who has dementia. He’d be the first to admit his life is nothing to write home about.
Alice is a zero-self-esteem divorcee, who is just about keeping it together enough to go on a singles’ web site.
They have nothing in common. They may have glanced at one another across a crowded shopping centre. But that’s it. Until Ursula gets kicked out of her friend’s house. Until Gareth’s mother starts receiving postcards from her husband who disappeared 20 years ago. And until Alice meets Simon on the web site.
Soon they will be together and fighting for one another’s lives.
If I lived in England, I would have no compunction about regularly nipping into town to settle in the corner of a Chinese restaurant where I would surround myself with multiple sizzling, tasty dishes. A heady mix of variety and familiarity. An indulgence and my guilty pleasure.
CL Taylor''s novels are my literary sweet and sour with a side order of rice and prawn crackers. She takes familiar plots and shakes them up to give them her own spin. She creates familiar characters but prevents them becoming stereotypes. And she understands the word flawed.
Sometimes I don’t like her characters, as is the case here. But, amazingly, this does not stop me from connecting with them. I think this is because she makes her characters real, recognisable and their behaviour is ultimately understandable.
The main characters, Alice, Ursula, and Gareth, are the also-rans of life, but each one is struggling with what to them are major issues. They are doing so in human and erroneous ways. Their current behaviour irritates, causing more than one raised eyebrow or headshake. However, as their backstories unfold, the reader sees inside them and learns why they might be seen as losers. And even I managed to empathise with them, although less so with Alice. She was the least credible of the three. Some of her thought processes and behaviour felt off kilter. Other lesser characters weave threats and a little menace to the story.
Although this story is written in the third person past tense and hops between the three main characters, there is a degree of intimacy and immediacy. The pacing is strong and punchy, partly because the chapters are short, partly because the language and writing style that Taylor uses makes for easy reading. It is great to read a book that is set in Bristol, not London, though the milieu is so brushed over, this could be Anywhereville.
The story gallops to the ending, and despite the twists being slightly predictable, there is much to celebrate as it crosses the finish line. Strangers is another fun-filled escape by the confident and highly competent Cally Taylor.