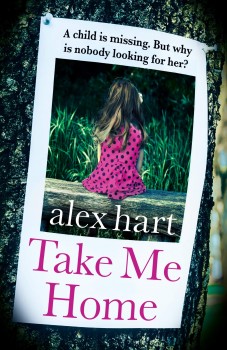 When Harper, a struggling photojournalist, finds a lost child in a shop, she doesn’t anticipate that finding the child’s parents will turn out to be quite so difficult.

Harper, a photojournalist in New York, is struggling financially. Jobs are hard to come by and her landlord wants the rent she owes, so she’s prepared to take anything on offer, even a photoshoot at a fundraiser in a zoo, but she’s also pinning her hopes on a glitzier job at a gala dinner. To cover that, she’ll need a posh dress. Her best chance for that is to buy something on credit and take it back the following day.

Unluckily for Harper, the dinner gig falls through, so she’s straight back to the shop the same day. While she’s returning the dress, Harper notices a young girl sitting by herself, in the same place where Harper saw her that morning. When she asks about the girl, the shop assistant says she knows nothing about her, and is keener on closing up at the end of the day than helping to locate the parents of a lost child.

Harper takes the girl to the security office but they’re equally uncooperative, so she ends up having to go to the police precinct. Their only answer is to ship the girl off to Child Protection Services. With memories of her own childhood experiences still vivid, Harper is reluctant to consign the girl to their not-so-tender mercies, so she takes the child – May – home with her, certain that someone will be looking for their daughter.

Finding May’s parents turns out to be nowhere near as straightforward as Harper first thought. She ends up enlisting the help of her friend TJ, a retired cop, who in turn brings in Harper’s ex-boyfriend, Reggie, a serving cop with NYPD. Both TJ and Reggie try to convince Harper to leave the case of the missing child to the police but their pleas are ignored, and the mystery deepens when Harper finds a scrap of paper in May’s pocket with the words ‘I’m sorry’ along with some strings of letters and numbers. Based on some flimsy clues from the bewildered four-year-old, Harper takes off with May to Florida.

Lost children are a huge staple in crime fiction on both sides of the Atlantic, and they’re normally something I avoid, as psychological and domestic noir is a part of the genre that holds only limited interest for me, but Alex Hart’s Take Me Home drew me in from the start and, like Harper, I wanted to get to the bottom of why no one was coming forward to claim May. The image of a four-year-old sitting alone in a shop, clutching a Mickey Mouse toy, was both poignant and engaging. I took to Harper, as well. She’s strong-willed and impulsive, but eminently likeable. The strength of her bond with TJ is immediately apparent, although Harper’s relationship with Reggie is a harder one to fathom at first. They seem to get on, despite their split, and Reggie is willing to put his career on the line to help her. The irony is that they split up because Harper did not feel able to commit to having children with him. That irony isn’t lost on either of them, but as far as Harper is concerned, that’s very much a no-go area.

Take Me Home has an intriguing mystery at its heart and amply lives up to its early promise. The characters are well drawn and spark off each other in a natural manner. May, who sometimes comes over as older than her years, never falls into the saccharine cutesy stereotype. It’s easy to see why Harper and her friends want to protect her. Their detective work brings them up against an almost cult-like lifestyle outfit but it’s still hard to work out where a lost four-year-old fits into the bigger picture. Alex Hart maintains the suspense throughout and the reveal about May, when it came, was both shocking and unexpected.

If, like me, you normally avoid missing kid stories, then do what I did and take a chance on Take Me Home. I don’t think you’ll be disappointed.