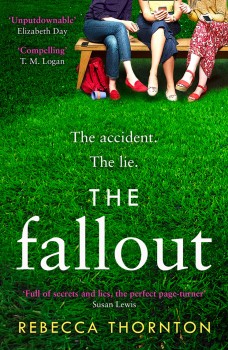 A moment of distraction could lose Sarah her best friend. And a little boy his life.

The Parkside Club, a west London health centre, is the place to be and be seen for the lycra-lovers of the area, including Sarah, Liza, Ella, Victoria, Miranda and Camilla, the members of the WhatsApp group, the NCT West London Ladies. But ‘ladies’ will soon be an almost obsolete word, when the hurricane style fallout of Liza’s son’s accident tears through the group.
Sarah sees her best friend’s four-year-old son climbing beyond his abilities and age. But Ella, a face from the past, distracts her. And instead of telling Jack to get down, she says nothing. Little Jack is badly injured, but Sarah can’t bring herself to admit to Liza that she could have possibly prevented the tragedy. Desperate for redemption, Sarah vows to do everything she can to make up for her mistake. Unfortunately, lies have consequences, and some are unforgivable.
I really wanted to like The Fallout. The premise had potential, but there are too many weaknesses undermining a slightly fragile story, not least the confused writing.
The story is told primarily from Sarah and Liza’s points of view as they struggle with the fallout from Jack’s accident, along with WhatsApp chat and interview transcripts. The petty dynamics, superficial priorities and boring minutiae, all too often present among groups of self-entitled, more-money-than-brain-cells mothers, although padding the pages, did nothing to help me connect with any of the characters.
Sarah is taxing, frustrating and irritating. She may have the best of intentions, but in her guilt, she is, if I am being kind to the author, impulsive, and makes irrational decisions. Her panic blows, what are from the start, almost absurd overreactions even more out of proportion. I presume this was an attempt to keep the story alight. Sadly, for me it just slackened the pace.

I could not connect with Liza either. She is uptight, partly due to the uncertainty surrounding Jack’s injury, partly because of the mess of a marriage she is stuck in. She is also verging on neurotic about an unsurprising past event, which the author delays revealing until the end.
The plot hangs on Sarah not doing what she promised. While the results are dramatic, the fallout is not a page-turner, even though I wanted to yell at Sarah for being so shallow and emotionally needy about a woman who ‘left the group’ five years ago. Sarah should have done a better job of checking up on the boy, of course, but her inattention is not a ‘crime’ that could sustain a whole novel.

I really don’t believe so many parents would have demanded answers as they do in the book. And I am certain few if any journalists would have found a story to get their teeth into. Perhaps I have been too long out of London, but I'm sure parents would question the circumstances of the accident then chalk it up to a there-but-for-the-grace-of God-go-I, accident. This is a drama boiled into a repetitive melodrama, circling incessantly back to Sarah not checking on Liza's son. By the end I didn't care about punishment, retribution or even who was right or wrong.