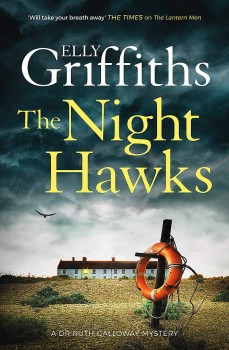 When a group of metal detectorists find a dead body on a bleak north Norfolk beach it's the start of another case for forensic archaeologist Dr Ruth Galloway and Detective Inspector Harry Nelson. All clues lead them to the isolated Black Dog Farm and the local legend of a ghostly hound whose appearance precedes violent death.

This is the 13th book in the Dr Ruth Galloway series and Ruth has returned from a brief flirtation with life as a lecturer at Cambridge University to head up the Archaeology Department of the University of North Norfolk. She has ditched her new life and her new man to return to her beloved cottage on an isolated stretch of this marshy coastland.

The body of a young man is washed up at nearby Blakeney Point and is stumbled upon by a small band of The Night Hawks, a group of metal detectorists who prefer to go out after dark. The detectorists have also uncovered a Bronze Age grave complete with buried treasure and Ruth is called in to help date the bones. She specialises in bones, which is handy with the number of bodies, ancient and modern, which turn up on this part of the beautiful but bleak north Norfolk coast.

These discoveries are closely followed by more bodies in the double murder – or possibly suicide –
of a mad scientist and his wife at Black Dog Farm where it is possible that shady human experiments have been carried out. Local myths and legends abound in this series and The Night Hawks is no different. On this occasion they feature Black Shuck, the hound from hell, large, jet black and red eyed. His appearance spells death.

Ruth helps the police as a special advisor and her on/off relationship with Nelson is a running and compelling theme. As always, the regular characters are brilliantly drawn and utterly believable.  All the usual suspects are here, and Elly Griffiths includes a helpful who's who at the end of each book. There are a handful of new arrivals, notably David, a recent addition to Ruth's teaching staff with an annoying know-all manner and a possibly dodgy past.

The writing is elegant and subtle. Both Ruth and her ten-year-old daughter Kate are appealing lead characters as is the very married, Detective Inspector Harry Nelson with whom her life is inextricably entwined. As the body count builds up all roads lead eventually to a dramatic show down at the sinister Black Dog Farm in the dead of night. The crimes themselves are tied up in a credible and satisfactory way …  but oh, the emotional cliff-hanger that the author employs so well.

As a self-confessed devotee of this series The Night Hawks did not disappoint.