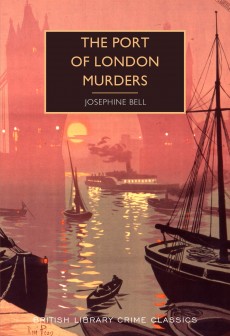 The Port of London Murders

Lost cargo on the river Thames leads police and two unlikely detectives to an apparent suicide, a smuggling ring and a murderous drug importing ring.

Josephine Bell, real name Doris Bell Collier, published more than 60 novels in a long career that began in the 1930s and continued almost up to her death in 1987. Bell, a doctor, forced by professional rules to adopt a pseudonym, never achieved the commercial success of the other ‘queens’ of the Golden Age – Christie, Sayers, Allingham, Marsh and Mitchell – and her most successful story sold little more than 15,000 copies.

This moody classic set in the south London docklands and published in 1938 is as much police procedural as murder mystery. Bell and her husband had practiced in Greenwich and she knew the impoverished narrow strip of land between Tooley Street, Bermondsey Wall and the river well. Her careful research with the River Police combined her own knowledge – Bell and her family were experienced sailors – make the many vivid passages relating to the river and other nautical details totally authentic.

So too is her social concern. That area of the south bank even then was a filthy early Victorian slum scheduled for demolition and redevelopment, featuring all kinds of deprivation and disease. Tuberculosis, rheumatism, heart trouble, and several rarer diseases were rife. Most men relied on casual employment on the docks, many more were out of work. Crime of all kinds was rife.

This bleak world with its dark, fog-filled streets, squalid tenements and families living in the most dismal circumstances permeates the entire story. A large, disparate group of characters, many at the end of their resources, with hospitals that could do nothing more for them, struggle in the worse possible surroundings, only Public Assistance – an early form of social benefit – ensuring they did not die too quickly.

This is hardly a traditional, rather cosy Golden Age story as Bell’s atmospheric writing weaves together a story of blackmail, bootleg lingerie, drugs and murder.

The freighter San Angelo berths behind schedule in the Thames after a dreadful storm-tossed crossing of the Bay of Biscay and the Channel and begins to unload her cargo into barges. Two are damaged in a river accident and part of their cargo lost.

This cargo is contained in double-ended boxes, the false ends containing pink chiffon nightdresses, on which no customs duty has been paid, destined for a fashionable West End lingerie retailer.

Meanwhile, on land, there are questions surrounding the death of a down-and-out female drug addict who apparently committed suicide by drinking a powerful disinfectant. But inconsistencies surrounding the death leave Met Detective Sergeant Chandler unsettled. The night before before he’s due to testify at the inquest, Chandler disappears.

The River Police are forced to call in Scotland Yard. Investigations are difficult with everyone hiding something as the story builds to a startling denouement.

Running parallel is a touching love story of two young street-smart south Londoners brought together by an accident on the river and a young boy who becomes obsessed with the work of the River Police – whose persistence and enthusiasm help them succeed.

This is not so much a who-dunnit as a how- and why-dunnit. There is very little mystery and the murderous drug dealers are quite obvious from their introduction. There are no big surprises or twists, but the various strands of plot are neatly tied up.

Background detail and setting are excellent and there’s a surprising amount of humour and romance woven into what could otherwise have been a grim tale. Bell also seems to pay tribute to two author friends, apparently co-opting Inspector Mitchell from Crofts and promoting Christopher Bush’s Detective Norris.

The usual interesting introduction from Martin Edwards sets the seal on a first-class book, a dramatic and powerful view of real life on the late 30’s Thames that should rekindle interest in the career and work of an author I have always thought to be greatly under-rated.