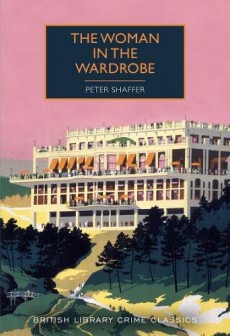 The Woman in the Wardrobe

The infallible amateur sleuth Mr Verity must unravel a locked-room mystery with a hotel maid found bound in a wardrobe as an unreliable witness.

Sir Peter Shaffer CBE, who died just four years ago, was one of the best English playwrights of the second half of the 20th century and a celebrated screenwriter, with successes such as Equus and Amadeus. While at Trinity College, Cambridge, in the early years after the war, in which he was a ‘Bevin Boy’ working in the mines, Shaffer, together with twin brother Tony, produced three Golden Age style detective stories.

The Woman in the Wardrobe features the giant, overweight and universally unpopular amateur sleuth Mr Verity – an irascible, jokey version of the Great Detective of the Golden Age authors, who collects stolen antiquities and solves his cases between lunch and dinner. His abrupt manner and belief in his own absolute infallibility is enough to upset any police officer caught in the whirlwind he creates around himself.

A thoroughly nasty blackmailer is murdered in a Sussex seaside hotel. There are more than enough suspects, including three of his victims who have specifically journeyed there with the intention of killing him. And to complicate matters, the locked room is not only locked, but the windows are also bolted shut, and it becomes clear that the maid found bound in a wardrobe is an unreliable witness.

Amid a welter of totally unnecessary and frankly pompous pronouncements from the learned, wilful and eloquent Verity on subjects as varied as hereditary sovereignty and the effectiveness of organized religion, Shaffer assembles his players with skill, originality and a good deal of humour.

The story storms along with the all theatricality and pace that would later characterize Shaffer’s dramatic output. It is also one of the best locked room mysteries ever created and is matched by a clever and unusual solution. If you are looking for a change from serious and heavy investigations, The Woman in the Wardrobe provides unashamed, straightforward fun.