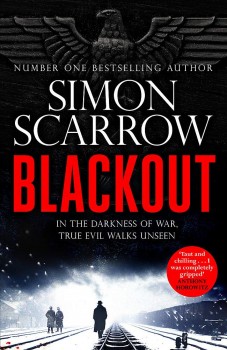 Criminal Inspector Horst Schenke is assigned to investigate the murder of a former well-known actress, but is put under immense pressure by rivalries in the Nazi hierarchy in an atmosphere where ‘disloyalty’ can mean death.

The habit history has of repeating itself must be welcomed by historian Simon Scarrow.

Take a pivotal moment in history. Take a normal hero or heroes trying to do a difficult job to the best of their ability, for the good of their country, but with a levelling of balance and compassion in an atmosphere of fear and uncertainty with powerful political factions struggling for supremacy under a ruthless dictator and you’ve got the basic Scarrow narrative.

A Caesar who believes he is a living God or the obsessed Nazi Fuhrer Adolf Hitler. The man at the top makes little difference. Nor does the constant infighting in the hierarchy as factions struggle for power – and a wrong decision, seen as disloyalty, can mean death whether the executioner is the Praetorian Guard or the dreaded paramilitary Schutzstaffel, the SS.

This thriller charts the beat of German life as the steady rise of Heinrich Himmler’s brutal Gestapo sees it become the dominant force, deciding and enforcing decisions on almost every aspect. This stranglehold – act now and pass legislation to justify it later – is not just the driver, but also almost the key to the action.

Criminal Inspector Horst Schenke is assigned to investigate the murder of a former well-known actress and one time mistress of propaganda chief Josef Goebbels. Her hidden mixed-race – part Jewish – heritage offers rivals among the Nazi inner circle the chance to seriously embarrass or even destroy his standing with Hitler.

Schenke is a member of the minor aristocracy, whose family lost their fortune and influence during the uncontrolled inflation of the Depression years. He made his name as a driver for the Mercedes-Benz Silberpfeil (Silver Arrow) team who dominated international motor racing between 1934 and 1939, with their W25 cars reaching speeds of well over 170mph.

A dreadful crash has left him with injuries making him unsuitable for military service and a victim to dreadful replay nightmares. But the independent-minded Schenke, who has dropped the ‘Von’ symbol of rank from his name, has made a successful career in the Kriminalpolizei, the investigative arm of the German police force.

His single-minded concentration on the fair and equal application of justice no matter who is involved and an unwillingness to become involved in the Nazi politics gripping the Reich’s Main Security Office, the fountainhead of all legal matters, make him an ideal fall-guy for those in the organisation with something to hide.

The action opens in the ‘Phony War’ winter of 1939 as Nazi dignitaries and the Berlin glitterati stamp snow from their boots while they gather for a ball to celebrate how Blitzkrieg – the lightning war – has crushed Poland and left the French and British to ponder their response. Paranoia in the capital is intensified by a rigidly enforced blackout that plunges the city into darkness every night, as the bleak winter sun sets and crime of every type soars.

The discovery of a second victim, then some determined police work by his team uncovering at least five more probable murders centred on the rail network, confirms Schenke’s worst fears that there is a serial killer on the loose. The investigation takes him closer to the sinister heart of the regime, and with the prime suspect apparently a member of German military intelligence, Schenke realises there is danger everywhere, particularly as his lover is the dangerously outspoken Karin Canaris, niece of the Abwehr boss Rear Admiral Wilhelm Canaris.

This is historical crime fiction at its finest – gripping, believable, intricate and sometimes terrifying. You won’t find a better story which so perfectly captures time, place and attitudes.