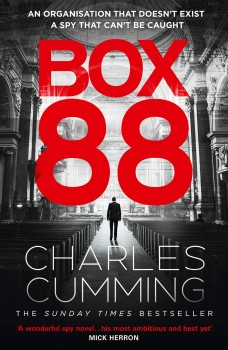 Lachlan Kite, working with top-secret spy agency Box 88, is abducted by Iranians and subjected to questioning about events one summer 30 years ago.

Lachlan Kite, ‘Lockie’ to his friends, is an agent for Box 88, a joint US-British organisation whose existence is known to very few at the top of better-known intelligence agencies. As the book opens, Lockie receives word that Xavier Bonnard, his good friend since they attended top public school Althorp together, has been found dead. Xavier had various addictions so his demise from an overdose is not unexpected.

The funeral in London is well attended. Afterwards Lockie is approached by Fariba, an Iranian who also attended Althorp School and claims to have been with Xavier shortly before his death. Lockie accepts the offer of a lift, but is alerted by clues that Fariba is not who he claims to be. His suspicions come too late, however, and he is rendered unconscious with an injection.

Lockie’s abductors have arranged matters with professional expertise and although his colleagues at Box 88 are soon aware he has been taken, they have little way of tracing him. Luckily, there is another agency with Lockie in their sights: MI5. A mole in Box 88 has blown Lockie’s cover to MI5 who to find out what he has been engaged in have agents in play, including Cara Jannaway, who is close enough to pick up vital clues.

Lockie comes round to find himself in a secure location, interrogated by ‘Fariba’ about events in 1989 when Lockie was on holiday in the south of France with the Bonnard family and their guest Ali Eskandarian. Although still young and awaiting his A-level results, Lockie had been recruited by Box 88 to spy on Eskandarian who was a man of significance in the Iranian regime.

Lockie’s captors show that they have his pregnant wife Isobel in their power and use this, plus the threat of torture against him, to persuade him to tell all about the events of that summer. Lockie attempts to reveal as little as possible and slowly, in the hope that he will be rescued before he and Isobel are killed. Chapters on his revelations alternate with those dealing with those feverishly seeking to uncover his location and effect a rescue.

The twin strands of current events and the summer which started Lockie’s career are interleaved well to provide interest throughout, although the activities of the rich at a posh public school or holidaying in the South of France may not have universal appeal. I did have some doubts about the basic premise: it is difficult to envisage the US and UK being sufficiently close to contemplate spying together – too many divergent interests.