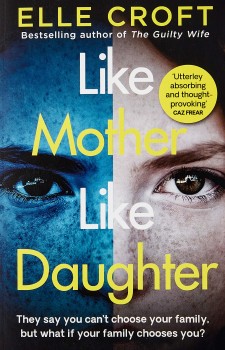 Kat has two daughters, Imogen and Jemima. She has a secret about the elder daughter, Imogen, that even Imogen does not know. One day Imogen disappears, and Kat is desperately worried that this is linked to what she knows.

Kat lives in a nice house in a nice neighbourhood near the coast in Australia. She has two daughters: Imogen, who is 16 and Jemima who is 12. Imogen’s behaviour is becoming increasingly challenging and when Kat is called to school because Imogen has assaulted another girl it reinforces Kat’s worst fears. She has carried a heavy secret for years. Imogen is adopted and her birth mother is a famous serial killer.

Imogen has no idea about her birth mother. She does not even know that she is adopted.

Sally, Imogen’s mother, is in prison and at intervals, the reader is privy to her thoughts as she plans how to influence the lives of her two remaining children.

At home, Kat finds it difficult to relax when challenged by Imogen and is desperate to support Jemima, her natural child.

Dylan, Kat’s husband and father to the girls, tries to find a middle path, supporting both girls and also his wife. Kat faces the brunt of Imogen’s hostility, and she is aware that her attitudes are constantly being affected by her fear that nature will overcome nurture.

One day, Imogen disappears after a family row. When she does not return the police become involved. Here the complications of her past become serious because no one apart from her adopted parents knows the truth about Imogen.

Imogen’s mother and father are both in prison and are infamous for killing their own children, but when they were arrested, they still had two living children. Although she does not know it, Imogen has a brother.

The story involves the family’s response, the intervention of the police and a standard child abduction story, even though there is no evidence that Imogen has been abducted. The plot also provides and insight into Sally’s actions as she seeks to gain her misguided revenge on society and her daughter’s adoptive parents. The denouement is surprising, interesting and very satisfying.

I really enjoyed this well-crafted and very readable book. The protagonists are well developed, with traits that are both likeable and not. I found myself changing my attitudes to the characters several times as the book proceeds. The story is very interesting and thought-provoking, and would also make a good film.