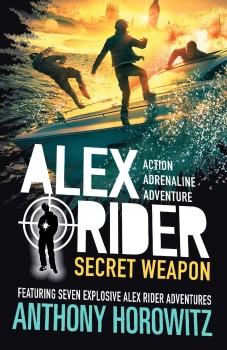 Secret Weapon is the book that Alex Rider’s fans have to thank for the continuation of the young spy’s highly entertaining adventures. After the traumatic events of Scorpia Rising, it looked very much like Alex had finally been allowed to go back to the life of an ordinary boy, moving to the States to live with his friend Sabina Pleasure and her parents. But Anthony Horowitz wasn’t quite able to leave behind the universe he’d created, and in 2015 he went on to write Russian Roulette, the backstory to top assassin, Yassen Gregorovich.

Then, several years later, his publishers suggested the idea of tidying up some short stories he’d written, published as bonus features and other extras, and Secret Weapon was the end result. The book contains three new adventures as well as the previously published stories, and in writing those, Horowitz realised that there were still more tales he could tell, and so the series continued, and in a very satisfactory manner, too, proving that follow ups aren’t always a mistake.

All the stories in this collection are set when Alex is 14, before the worst of his tangles with Scorpia and his own deranged clone, Julius Grief. The young spy is less traumatised, and there is a lighter tone to some of the stories, such as the delightfully entertaining Tea with Smithers, which provides some insights into the behind the scenes life of MI6’s gadget inventor, Q to Alex’s Bond. In my view, Smithers is the only person in MI6 who never manipulated or lied to Alex and, as his creator revealed in Scorpia Rising, there’s a lot more to Smithers than meets the eye – or do I mean a lot less? You’ll have to read the books to discover what lies behind that remark.

In Alex in Afghanistan, he has to undertake a perilous journey that only someone of his age – and size – would be able to accomplish, but despite all the promises, nothing is ever simple where his missions are concerned. The Man with Eleven Fingers starts with a rare glimpse into what Alex was like when his housekeeper – and later his closest friend – Jack Starbright first arrived in a house in Chelsea to help look after a truculent seven-year-old, then moves onto the case of Freddy ‘Fingers’, a man on trial for a massive case of embezzlement. And Alex’s concerns about some dubious chocolate bars lead to one of the few times he actually contacts Mrs Jones and Alan Blunt of MI6 of his own accord.

High Tension is the shortest story in the book, set in the south of France on a day when Alex tries out parasailing, and naturally, things don’t go entirely to plan, forcing him to put his skills and training to use to get out of a dangerous situation, that for once has nothing to do with anyone deliberately trying to kill him.

The title story, Secret Weapon, pits Alex against someone from his past, a dangerous drug dealer with a grudge against the boy who was responsible for him ending up in prison. The story contains all Horowitz’s trademark ingenuity when it comes to planning and plotting and, as usual, showcases Alex’s own abilities to the full, as does the final story in the collection, Spy Trap, in which Alex ends up in a secretive hospital, treated by people who claim to be looking after him following a car accident, but he quickly has his doubts about their motives.

It’s the penultimate story, though, that in some ways has the widest ramifications for Alex. Christmas at Gunpoint looks back to a winter holiday in a small resort in Colorado.  The story points up how Alex was trained by his uncle, himself a spy in the employ of MI6, from a very early age to follow in what was effectively a family profession. It demonstrates a cynical willingness to exploit a young boy, and shows that, in essence, Alex’s whole relationship with Ian Rider was based on a series of lies, a hard lesson for him to learn and an even harder one to look back on, although there is an alternative explanation that maybe Ian was simply giving his nephew the skills needed to survive if Ian ever accidentally brings his work home. You pays your money, you takes your choice where that relationship is concerned.

For fans of the series, Secret Weapon is an excellent and varied collection, showcasing Alex’s talents and problem-solving abilities, interspersed with some rare domestic moments, including his huge fear of dentists!