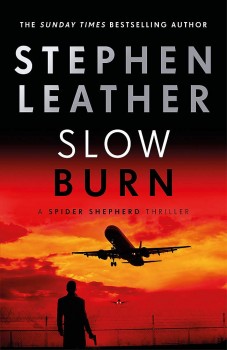 Spider Shepherd is taxed with bringing a former jihadists wife and son back to the UK as the price for his cooperation with the security services but, as ever, there are added complications.

When a Syrian asylum seeker arrives at Heathrow airport claiming to have information on ISIS terrorists in the UK, Dan ‘Spider’ Shepherd is dispatched by MI5 to assess whether the man is likely to have useful information. Salam Jaraf insists that the price of his cooperation is bringing his wife and teenage son here from a refugee camp in Turkey. He claims to have been training British jihadists in the use of specially adapted drones and insists he can identify those now working in the UK for the security services.

Spider is convinced Jaraf does have valuable information. His boss, the surprisingly likeable Giles Pritchard, agrees to Spider taking a trip to the refugee camp to bring the woman and her child to the UK to win Jaraf’s cooperation. While he’s there, Spider is asked to interview three of the numerous jihadi brides who chose to go to Syria as teenagers but later regretted their decisions and are now desperate to come home. Public opinion at home is relentlessly against them, as is the local embassy man tasked with helping Spider while he’s in Turkey, but Spider thinks one of the girls might have useful information, and he’s usually a good judge of a potential informant’s character.

Getting them back to the UK proves more complicated than Spider is expecting and a further complicating factor is a honey trap operation he was working on undercover back in London, proving that nothing is ever easy in the ex-SAS hardman’s working life.

I’ve read Stephen Leather’s Spider Shepherd from the beginning, indulging my love of what Sharon Wheeler always describes as willy-waving thrillers, but of late, I’d begun to feel that the books had started to cross a line into gratuitous violence and what appeared to be some thinly disguised racism, so I was pleased to see that Slow Burn goes some way to reversing that trend.

The depiction of the three jihadi brides feels relatively even-handed and it is easy to see the two sides of what at first appear to be rather unsympathetic characters who had taken decisions they have later come to regret and now want to turn the clock back and return to the UK. All three have different stories and different voices, and although Spider has some sympathy for all of them, he has to take a pragmatic decision based on their likely worth as intelligence assets rather than on the basis of any sympathy he has for them as young women who have endured deeply unpleasant experiences, even if they are ones they’ve brought on themselves.

The part of the story that involves Salam Jaraf and his family certainly holds some surprises, although for me it is the weakest plot strand as in part it seems to rely on giving Spider a hefty thump on the head from the stupid stick, but despite that it feeds well into a complex web that at times seems almost impossible to navigate.

It’s good to see more of Giles Pritchard, Spider’s boss at MI5. All too often in thrillers the people higher up the management food chain are depicted as effete Oxbridge types with double-barrelled surnames and zero morals or common sense, whereas Pritchard seems relatively down to earth and competent, and has a reasonable relationship with Spider. I particularly enjoyed his off the books dealings on a squash court with his ruthless Mossad counterpart, and I also raised a wry smile at the brief cameo appearance from Spider’s old acquaintance Richard Yokely in what is increasingly becoming a classic deus ex machina trope where he flies in, tells Spider something he needs to know and then jets out again.

The denouement is, as ever, high stakes and action-orientated, although a trifle short by way of pay-off. But as ever, Leather delivers a competent military grade thriller with a convincing level of detail without swamping the story in acronyms and hardware detail.