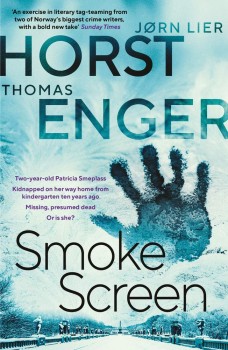 When a bomb rips through the centre of Oslo as the clock strikes in a New Year, police officer Alexander Blix and journalist Emma Ramm are both at the scene. And so begins a new investigation and a ten-year-old mystery to solve for this unlikely partnership ...

Smoke Screen is the second collaboration between Jørn Lier Horst and Thomas Enger, two of Norway's best known crime writers, to feature Alexander Blix and Emma Ramm. The action begins on New Year's Eve in central Oslo. A bomb explodes in what at first appears to be a terrorist incident.

In a dramatic opener, both Blix and Ramm are immediately involved – Blix on official duties and Ramm as a bystander. After a tiff with her Danish boyfriend, Kaspar, Emma has decided to join the firework celebrations but it turns out that Kaspar has followed her and he becomes a victim of the explosion. Meanwhile Blix has dived into the icy waters of the harbour to pull out a young woman – another victim of the blast.

So far, so frantic. The story continues at a hectic pace throughout and I wonder whether this is because there are two writers, both wanting to contribute ideas. And two cases become entwined when the young woman pulled from the waters appears to be the mother of a missing toddler – a famous case of abduction which Blix himself had investigated ten years previously.

From then onwards Alexander Blix and Emma Ramm are involved in two searches – one for the bomber and one for the little girl who it now seems may still be alive. Blix becomes involved in the family dynamics of the missing girl while Emma has to deal with the grieving parents of her dead boyfriend.

As the action switches between Norway and Denmark, Blix and Ramm pursue their enquiries almost completely independently of each other, which is strange because the presentation of this book indicates that they are some kind of detecting duo, like Holmes and Watson, but this isn't the case at all. They do arrive at the all-action denouement together but again this is more by luck than judgement.

I would have liked a little less action and a little more characterisation. Blix and Ramm are potentially an interesting pairing. It seems that Emma was orphaned as a young girl in tragic circumstances, a tragedy that Blix himself played a large part in. He has become something of a father figure to her and in turn feels a certain obligation to treat her more favourably than the other journalists he has to deal with. This dependency may have been dealt with in more depth in book one of the series, but I would have appreciated a little more meat on the relationship here.  In this story I don't think they were ever even in the same room together.