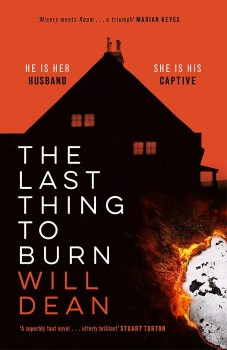 The Last Thing To Burn

A young Vietnamese woman smuggled into Britain is imprisoned in a rural hell and as the last of her possessions are taken from her she desperately seeks a means to escape.

Thanh Dao and her sister Kim-Ly paid to be smuggled into the UK on the promise of good jobs, but after arrival were separated: Kim-Ly to a nail bar and Thanh to a farm in the Fens. Thanh has spent seven years alone with Lenn, rarely catching sight of another person and never going more than a few hundred metres from Lenn’s crumbling shack.

Thanh, or Jane as Lenn calls her, would flee but Lenn holds all the cards. He threatens to expose Kim-Ly to the immigration authorities. He has installed CCTV so that every night he can check Thanh’s movements during the day. Any infringements of Lenn’s rules brings punishment, including the consigning of one of Thanh’s remaining possessions to the stove. By this time they are very few - letters from her sister, a photograph of her parents, and her old ID card.

After the second attempt at escape Lenn smashed her ankle with heavy wirecutters, breaking the bone and leaving her crippled. The pain is such that she cannot deny herself the animal tranquilisers he gives her, although the mental confusion they cause saps her will and she has to fight to clear her mind. Life in this decrepit mould-infested hovel in a bare windswept Lincoln fen would be bad enough under any circumstances; under Lenn’s tyranny it is enough to crush the spirit.

The picture changes with two arrivals. A new neighbour, Cynthia, calls at the house and although Thanh is too afraid to reveal the truth Cynthia is curious and will come again. And Thanh realises she is pregnant – the result of Lenn’s repeated rapes but giving rise to a new life that she is determined to protect. Thanh’s difficulties are grave, but can she fashion a way to escape the monster who holds her prisoner?

Lenn is particularly well drawn, a man who likes things done as his mother did them and the very picture of rural conservatism with the addition of selfish cunning and the capability for exquisite tortures without ever raising his voice. In the evenings he likes to settle in front of the TV with Thanh against his leg, stroking her hair and telling her that they are doing just fine, a scene to make anyone shudder.

I started this book repulsed by the scenario the author has created, one of such horror that the mind rebels against its probability. The characters of Lenn and Thanh, however, are brilliantly sustained, and it is not long before the reader is drawn in and looking for opportunities for the protagonist to free herself. When she finally makes her move the tension is intense, in a sustained passage with new astounding revelations and uncertainty about the outcome until the very last moment.