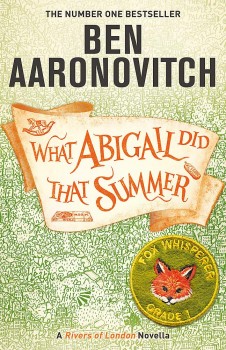 What Abigail Did That Summer

While magician and copper Peter Grant is off chasing unicorns and missing children, his 13-year-old cousin Abigail has some missing kids of her own to investigate, with the help of a bunch of talking – and very organised – foxes.

The latest novella in Ben Aaronovitch’s Rivers of London series hops back in time to the summer of 2013 when apprentice magic practitioner and long-suffering London copper Peter Grant was plucked from his natural habitat and deposited in the wilds of the Herefordshire countryside to chase unicorns and search for missing children.

Meanwhile, back in London, Peter’s cousin, Abigail Kamara, apprentice wizard and all-round nosy teenager, is also concerned with missing kids. Teenagers in the Hampstead Heath area have been going missing and then turning up again, seemingly unharmed, but unhealthily vague about where they’ve been and what they’ve been doing.

Abigail doesn’t like things she doesn’t understand, and she wants to get to the bottom of why her friend Natali didn’t turn up to the promised ‘happening’ on the heath, so with the help of her new friend Simon and a crack team of talking foxes, she’s determined to get to the bottom of the mystery despite opposition from the ‘feds’ and Simon’s very formidable mother.

As entertaining as Abigail always is, the star of the show for me was Indigo the fox, who’s straight out of an Andy McNab thriller, with talk of training and spying and exfiltration. The talking foxes have appeared before, but never with such a big part to play and in the world of magical London, it’s remarkably easy to suspend disbelief in the face of a bunch of foxes whose job it is to spy on everyone else.

Aaronovitch builds a genuinely creepy scenario with a possessed house and its strange inhabitants and the scenes when Abigail and Indigo are trying to escape are tense, with an unsettling horror film vibe that’s enough to raise the hairs on the back of your neck, especially if you’re reading late at night.

The interweaving of the magical and mundane in the heart of London works as well as ever and Abigail makes an excellent narrator, with the addition of editorial footnotes on her vocabulary. Aaronovitch succeeds in giving her a strong narrative voice and seeing both worlds through her eyes is a great addition to a series that has built up a very justifiable reputation as the most entertaining mix of urban fantasy and crime that the genre has to offer.

The novellas (and the graphic novels) are a great way to get a much-needed fix of the world of the Folly in the gaps between the full-length novels, and I very much enjoyed the appearance of Peter’s friend, mentor and boss, Thomas Nightingale, whose interactions with Abigail are always a joy. Nightingale recognises her potential and is willing to teach – even though he claims not to be doing that. At least not yet … He’s also willing to conspire with Abigail on the subject of what Peter needs – and doesn’t need – to know.

They make a great team – with the help of Indigo, Sugar Niner and the rest of the foxes, of course.