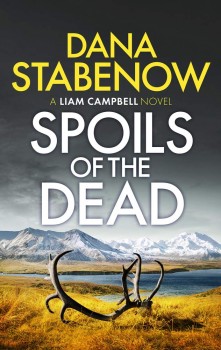 Spoils of the Dead

Trooper Liam Campbell and his partner Wy have resettled in an Alaskan coastal town – and have barely arrived before an archaeologist is brutally murdered, in an echo of a homicide some 30 years ago.

Dana Stabenow’s series featuring Alaskan pilot Kate Shugak now runs to over 20 titles; this is counted number five of a second series with Alaskan State Trooper Liam Campbell in the lead role. As the book opens, Campbell and his partner, pilot Wyanet Chouinard, arrive to take up a new home in Blewestown, overlooking the spectacular Chungasqak Bay.

Among Liam’s early acquaintances is Erik, an archaeologist who has unearthed ancient artifacts used by local native tribes, still the predominant occupants of the small settlements around the bay. Within a few days, Eric is found murdered in the cave where he made his finds, at the back of which is discovered the remains of another body, that of a ten-year-old boy who went missing 30 years previously.

Eric’s death occurred following a gathering at the nearby home of a celebrity, and Campbell’s interviews of the guests introduce various people in the local community. Several of these have motive: Erik was intimate with many women, single and married, in the town, and his claims for native artefacts and trails threatened the exploitation of the area for oil and gas and the employment and profits that it would bring.

As usual with Stabenow’s novels, the Alaskan landscape forms the background and she well conveys the majestic scope and scale of the state, with interesting detail about politics both recent and historical and facts about the many different tribes, the challenges faced by the natives and some of the traditions and ways of life. Small aircraft are convenient for medium distances, and again through Wy’s experience as a professional pilot we get a taste of this experience.

The books in the series set in winter months depict the preponderance of ice and snow, a climate more fun to read about than actually live in. This episode is set at the end of the short summer, so life is a bit more familiar, although locals are well togged up in padded clothing and solid boots. Stabenow always makes free rein with trade names for common Alaskan wear, most of which are a mystery to anyone from the UK, although you can usually make a guess.

The impression conveyed by the book is that the author is showing us around a new setting, with Liam and Wy finding their feet. There are hints that Liam’s demanding boss, Barton, and Chief Armstrong of the town police will be a source of conflict, but for now life runs pretty smoothly. Even the murders are wrapped up without Liam having to exert himself overmuch, leaving plenty of time for Liam and Wy to reaffirm their relationship with a frequency impressive for a couple in their late forties.