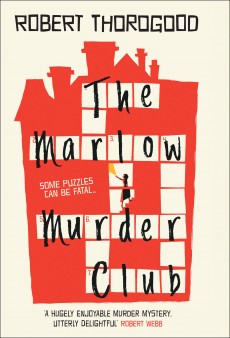 A shocking event leads to a trail of murder that only Judith, as a veteran setter of cryptic crossword puzzles, can help to solve.

The Marlow Murder Club is part of an increasingly popular genre of crime novel – elderly people (mostly female) getting together to solve some rather nasty crimes. In this case they form the club of the title. The members are 77-year-old Judith, who likes living alone and drinking whisky in her faded mansion house on the banks of the river Thames. And there’s her neighbour, Suzie Harris, a middle-aged eccentric dog walker, and downtrodden local vicar's wife, Rebecca 'Becks' Starling. The police presence is largely irrelevant.

This is the world of suburbia – bell-ringing, canoeing on the Thames, art galleries and antique dealers, and doggy folk. It's very cosy. Author Robert Thorogood is the creator of the very popular TV series Death in Paradise. And in this story, comfort crime for our times, we are transported to Buckinghamshire. This has been likened to crime for fans of Agatha Christie. Well, entertaining it is, but Agatha Christie it is not – Agatha is far too sinister.

Stefan Dunwoody, a local art gallery owner, is found shot dead, straight between the eyes, with an antique German Luger pistol. It’s an execution. This is a shocking event in Marlow and is swiftly followed by two more deaths with the same modus operandi. Clues left at the scene tie the murders together, but nothing seems to link the victims. The police are baffled.

Enter our intrepid heroines: Judith, Suzie and Becks. Through a combination of determination and bluster (Judith); cunning and intuition (Suzie); pretty face and hidden steel (Becks) they chat up witnesses and penetrate the middle-class facades of Marlow where officialdom seems unable to go. They are even made 'civilian advisers' down at the police station by Senior Investigating Officer Tanika Malik, which goes to show how little progress her official investigation has made!

Even the two main suspects are on the cosy side. Elliot Howard, the flamboyant and imposing owner of the Marlow Auction House, was seen having a public row with the first victim at Henley Regatta. He is a leading light in the church choir and choir practice provides him with an unshakeable alibi. Then there's Andy Bishop, a local solicitor who benefits financially from the death of one of the victims. He’s a short, fat man with a touch of the Benny Hills who is quite taken with vicar's wife Becks. He too seems to have water-tight alibis.

The action builds nicely to a prolonged confrontation although there is a detailed explanation of who did what to who and why! But this is an entertaining if undemanding read. And for Judith, Suzie and Becks, who display great courage and resourcefulness, they not only solve the case but also find a new friendship and solace in each other's company.