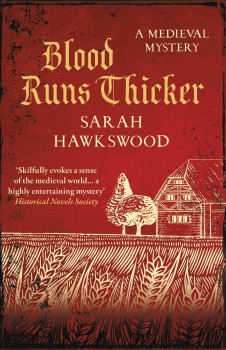 Undersheriff of Worcester Hugh Bradecote and his associates, the cynical Sergeant Catchpoll and his apprentice Walkelin must solve the mystery of who killed the unpopular and bullying manor lord Osbern de Lench and left his body stripped to its underwear.

August 1144. It’s harvest time and the pressure is on to bring in the crops before the weather breaks. Osbern de Lench is known as a hard master, with a short and often frayed temper, who treats family, servants and villeins with the same Norman contempt and brutality. When his horse returns riderless from his daily survey of his land and his lifeless body, stripped to its underwear, is found soon after, few mourn his death.

De Lench was hated by his neighbours, most of whom were his sworn enemies. He was at almost permanent odds with his equally hot-tempered heir Baldwin and was bullying and often physically abusive to his second wife and her son Hamo. So the three detectives Undersheriff of Worcester Hugh Bradecote and his associates, the cynical Sergeant Catchpoll and his apprentice Walkelin have a wide variety of suspects who would have like to have seen this unpleasant man dead, even after quickly dismissing the possibility that his murder could have been the work of one of the many groups of bandits or deserters who terrorized rural England.

One of the abiding themes in Sarah Hawkswood’s work is the almost uniformly bleak situation of women of the period. She continues this focus, with only Bradecote’s wife, Christina (and even she has hints of abuse in her past) and the emerging young healer Hild, forced by circumstances to step up ahead of her time, offering much hope for a better future. This was a not period when women were highly regarded and so striking a balance between historical accuracy and the handling of subjects where modern-day sensibilities differ so markedly from the mores of the time can be a problem, but this is something Hawkswood tackles head on, making her work even more credible.

Her characters, as always, are well presented and believable and the solution as to who killed de Lench is ingenious, set in a good puzzle. But as usual it is the interplay between the detective trio that provides the most enjoyable moments in the book – especially Catchpoll and Walkelin pretending to be cowed underlings to enhance Bradecote’s stature.

Her detective trio are outstanding examples of a gradual change that produced the Englishmen who would dominate much of Europe 150 or more years later under the reign of Edward III.

Hugh Bradecote has gone from stripling Norman lord, convinced of his own correctness and superiority, to a balanced and sensible officer, never too proud to accept that those of lesser rank or education may have something to offer. Walkelin, once a frightened youth and an ineffective man-at-arms, is maturing on every outing, unafraid to express an opinion where he thinks it of use and always ready to shoulder greater responsibility.

Only the wily Serjeant Catchpoll remains largely unchanged. He represents the classic senior NCO at the heart of every organized army since Rome, but even he is mellowing, although trying not to show it, as he begins to appreciate the changes in his colleagues

Hawkswood’s descriptions of village life, such as the all-consuming concern from manor lord, priest and villagers over the weather and its effects on the harvest – the only insurance against a very real threat of famine – add to the realistic atmosphere.

As the investigation progresses, secrets from the past and hidden agendas are revealed along with tantalizing clues and false trails all deeply sunk in the superbly generated atmosphere of medieval Worcester. This is another great story in a well-developed series.