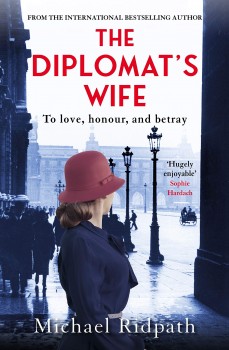 Eighteen-year-old Phil agrees to drive his grandmother on a last tour of places she had lived as a young diplomatic wife and is plunged into a dark world of spying and danger.

The story opens in 1936. Mussolini rules in Italy. Franco is winning the Spanish civil war. In Germany Hitler, having completed the Anschluss with Austria, is now eyeing Czechoslovakia. The only alternative to the seemingly unstoppable rise of fascism appears to be communism, an idea which attracts much attention from many among the high-minded British left wingers.

At Cambridge University, through a secret society known as The Apostles, the Russians have already recruited the services of Burgess, Maclean and Philby, as well as Anthony Blunt. All were on a career path to high positions in British intelligence and Blunt later became Keeper of the Queen’s Pictures.

One of those secret society members is the brilliant son of an aristocratic family destined for what is expected to be a spectacular career in the Foreign Office. When he is killed in a mysterious car crash, his naïve, adoring and devastated younger sister Emma vows to keep his memory alive by embracing his dreams of a Communist revolution.

But her flirtation with the ‘workers’ party’ is threatened when she marries an ambitious diplomat and has to embrace a new lifestyle. Then she discovers her husband has been betraying her – with her own mother – and when one of her brother’s old comrades asks her to report on her philandering husband, she is more than happy to love, honour and betray to gain her revenge.

More than 40 years later, in 1979, as the British establishment still counts the cost of the betrayal by the Cambridge spies and rumours abound of a Fifth Man said to be highly placed either in the security services or at the very top of government, Emma’s grandson, Phil, dreams of touring Europe in his gap-year, even though he has no means of funding his ambitions.

So when his grandmother suggests he acts as her driver/companion on a nostalgic trip to the places she lived as a young diplomatic wife, he jumps at the chance to travel with her. She does not tell him that she is trying to solve a wartime mystery that will come back to haunt her and lead them both into danger. Nor does she divulge that this will be her last journey as well as her own search for answers and a quest for justice and if necessary, revenge.

As they travel, she tells the story of her life and the easy rhythm of Phil’s world is turned on its head as he is forced to grapple with his emerging perceptions and loyalties. It is easy to feel some sympathy with him as he wonders who to trust. While some of his actions are naive, allowing him to fall into obvious traps, in the end he proves himself quick-witted and resourceful. His steadfast devotion to his grandmother makes theirs a touching partnership across the ages.

Emma is a marvellous character, totally un-diplomatic in her opinions, never afraid to speak her mind, organised and determined. The huge supporting cast, including literary giants Marc Chagall, James Joyce and Gertrude Stein, add atmosphere and colour, as do the diplomatic parties, the embassy politics and her observations on pre and post-war Germany. Ridpath’s observations through his characters on the merits or otherwise of the opposed totalitarian regimes are always interesting, as is his absolutely superb portrayal of the towns and countryside they travel through.

This fast-paced, dual timeline spy story, reminiscent in some ways of John Buchan’s masterpiece The 39 Steps, has it all. It’s an espionage thriller, a coming-of-age saga, a beautifully depicted travelogue, a political treatise, a love story and a tour de force not to be missed. With the right casting and enough investment, it would make a scenic and gripping film.